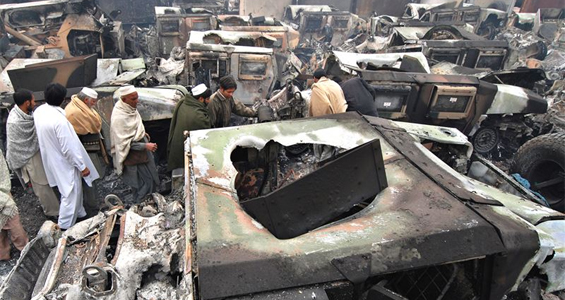 Wednesday’s deadly attack on a Nato supply convoy near Islamabad was the first such attack near the Pakistani capital.

But convoys are a regular target elsewhere in Pakistan, the main supply hub for the US-led war in Afghanistan.

Thousands of trucks driven by contractors transport goods from the port city of Karachi to Afghanistan, by way of two main supply arteries through Pakistan. One route cuts through the Khyber Pass, west of Peshawar; the other crosses the border further south, at Chaman, near the city of Quetta.

Every point in the supply chain, it seems, is vulnerable to attack.

In January, a group of gunmen on motorcycles attacked a supply convoy in Karachi. A rocket attack in November on a Nato fuel convoy near Quetta killed one person and torched five tankers. A suicide bomber killed more than 20 people last April in a convoy attack in Kahot, 45km south of Peshawar. 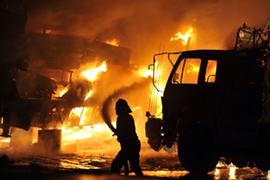 The northern route is particularly volatile: Taliban fighters temporarily shut the Khyber Pass at least seven times last year, and the Pakistani army has occasionally closed it while conducting military operations in the area.

(Both crossing points are useful conduits for Taliban fighters moving between Afghanistan and Pakistan.)

Still – largely for lack of a better alternative – Nato continues to ship roughly 50 per cent of its supplies through Pakistan, including nearly 70 per cent of its non-essential supplies (urgent supplies are usually flown directly to Kabul or Kandahar).

Nato commanders have long sought an alternate shipping route. Landlocked Afghanistan offers three other options: Iran, the only neighbour to the west; China, which shares a small border (just 76km) in the northeast; or the three Central Asian states to the north.

The Iranian option is a non-starter because of political considerations. China, too, is an unlikely supply route, despite reports earlier this year that the US defence department was exploring the option.

It’s unclear whether the Chinese government would allow shipments of war materiel, and the Wakhjir Pass between China and Afghanistan is more than a 4,000km drive from China’s major port cities.

Containers start in Latvia or Georgia; they move overland through Russia and the former Soviet republics, and trucks eventually carry them to Afghanistan. 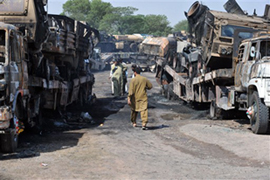 Nato moves roughly 300 containers per week through NDN, up from around 100 when it was first inaugurated last year. The system has a maximum capacity of around 500 containers.

But several problems continue to limit the NDN’s usefulness.

The long distances make it an expensive shipping network: It costs two-and-a-half times more to ship goods via NDN than through Pakistan, according to the US defence department.

Most of the goods shipped from Europe finish their journey in Uzbekistan, which creates a major bottleneck: The Amu Darya river separates Uzbekistan from Afghanistan, so trucks must use one of several makeshift barges or wait to cross the single bridge.

A still-under-construction railway line will eventually move goods between Termez, in southern Uzbekistan, and Mazar-e-Sharif in northern Afghanistan – but Nato officials concede it won’t be finished until at least 2011.

Security is also a mounting concern for shipments from Central Asia. Taliban fighters last year hijacked a convoy of fuel tankers in Kunduz province, in northern Afghanistan, shortly after it crossed the border from Tajikistan. Security in the area has deteriorated in recent months, and as the NDN carries more cargo, Nato commanders fear it will become a more attractive target for the Taliban.

The NDN is controversial with human rights groups, too, who say it forces Nato to rely heavily on Uzbek president Islam Karimov’s autocratic government. The whole network is quite tenuous, relying as it does on seven different countries; objections from any one government would jeopardize supply lines.

So Pakistan will remain Nato’s main supply line, despite the insecurity, which Nato says causes only minor disruption to its shipments.

A Nato spokesman in Kabul said Taliban attacks have destroyed “less than one percent” of the goods bound for Afghanistan. “They don’t really disrupt our supply lines,” he said.