Nyan Win, who is Aung San Suu Kyi’s lawyer and an NLD spokesman, was not optimistic about the visit.

“I welcome the visit of Mr Kurt Campbell but I don’t really understand what he expected to achieve from the visit,” he said.

Campbell, the assistant secretary of state for East Asian and Pacific affairs, told reporters in Bangkok before leaving for Myanmar that he was concerned about recent political developments.

“We’re troubled by much of what we’ve seen and we have very real concerns about the elections laws and the environment that’s been created,” he said.

“Our team would like the opportunity to engage directly and see what the plans are in terms of the overall approach of the elections.”

Campbell will meet senior Myanmar officials for talks at the country’s administrative capital, Naypyidaw, according to a diplomat who spoke on condition of anonymity.

He will then meet Nyan Win, Myanmar’s foreign minister, Kyaw San, the information minister, and U Thaung, the science and technology minister and the former envoy in Washington, as well as the point person for US-Myanmar engagement.

Relations between the US and Myanmar, also known as Burma, have been strained since the military crackdown on pro-democracy protests in 1988 which left scores of mostly students dead.

The US has since become Myanmar’s strongest critic, applying political and economic sanctions against the military rulers for poor human rights record and failure to hand over power to a democratically elected government.

But last year, Barack Obama, the US president, reversed the previous administration’s isolation of Myanmar in favour of dialogue with the ruling military.

The generals have kept Aung San Suu Kyi, 64, under house arrest for 14 of the last 20 years.

Campbell met her in Yangon last November when he became the highest-ranking US official to visit Myanmar in 14 years.

“We will be meeting with elements of the NLD. We will meet with other elements as well,” he said.

The NLD chose to be disbanded rather than take part in an election it says will be a sham, ceasing its political activities on Friday after declining to register under the country’s new election laws.

The forthcoming poll will be the first in 20 years.

The NLD won Myanmar’s last election in 1990 by a landslide but the army refused to recognise the victory and never allowed it to take power.

An NLD faction said on Friday it would form a new political party but has not decided whether to run in the elections. 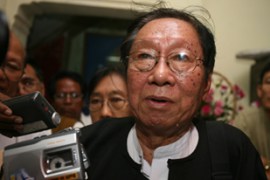 Members of disbanded National League for Democracy break away to run in polls. 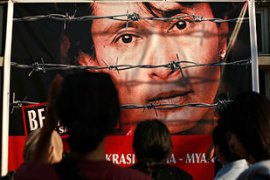 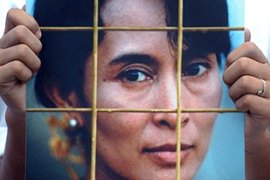 Military announces election law disqualifying anyone convicted of a crime. 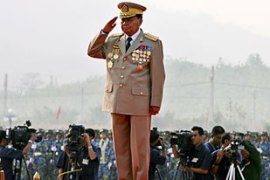 Military says five-member commission to oversee vote must be “eminent and loyal”.