Joseph Stalin is one of the most controversial figures in Russian history.

To some, Stalin is a war hero and an iconic leader, to others a brutal murderer responsible for the deaths of millions of people.

As Russia gears up to mark the 65th anniversary of its victory over Nazi Germany on Sunday, the legacy of the man who led that victory is once again in the spotlight. 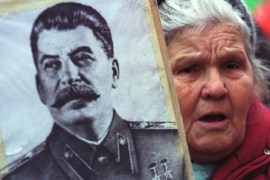 Soviet archives have offered an unprecedented glimpse into the life of the dictator.