Asked about the fate of the NLD, he said: “It’s gone – no matter what [members opposed to standing in the election] keep saying.”

The new NDF party will be chaired by Than Nyein and involve former NLD figures Win Naing and Thein Nyunt, he said.

On March 29, members of the NLD voted unanimously to boycott the upcoming polls because election laws barred many of its senior figures from running.

The NLD boycott came six days after Suu Kyi said she “would not dream” of registering the party for the election.

Nyan Win, and NLD lawyer and party spokesman, said that while the party “may cease to exist under the law” it would continue to carry out social activities while party members will individually engage in political activities.

“We will survive as long as we have public support,” he said.

The NLD won the last election in 1990 by a landslide, a result the military government ignored and recently annulled.

A total of 30 groups have applied to set up new political parties and 24 had been approved by May 4. New parties have until June 6 to apply.

Six are believed to be allied with the military, which has ruled with for almost five decades.

Only four of 10 existing parties have applied to run. Three, including the National Unity Party (NUP), comprise former members of the pro-government Socialist Programme Party.

At least 20 ministers, including prime minister Thein Sein, resigned from their military positions last week to run in the election as civilians.

Most are expected to join the Union Solidarity and Development Association (USDA), a new party representing a powerful government-backed social organisation that claims to have 24 million members – about half of Myanmar’s population.

The elections, the date which has been kept secret, have been widely criticised as being designed to entrench army rule by allowing the military to retain control over key ministries while pulling the strings behind a civilian-fronted government.

Under the 2008 constitution, approved by a disputed referendum, the military will be allocated 25 per cent of parliamentary seats and a third of the senate.

Former generals and allies of the government are expected to take up many of the other seats, limiting the powers of any elected opposition. 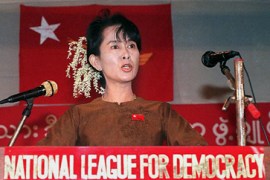 Suu Kyi’s party ‘to be dissolved’

Myanmar opposition party says campaign will go on as it faces being disbanded. 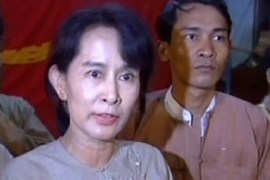 Myanmar opposition to be dismantled

But party of Aung San Suu Kyi says campaign will carry on ahead of upcoming poll. 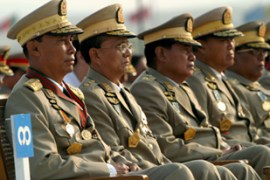