“We are suspicious about the timeframe, which is within the power of the election commission and not the prime minister,” he told supporters at the protest site.

Al Jazeera’s Wayne Hay, reporting from Bangkok, explained that the red shirts want a firm date for the dissolution as they feel that the reconciliation plan put forward by Abhisit Vejjajiva, the prime minister, has too many “get out clauses”.

He said that little movement on the issue was likely on Wednesday, as Thais were marking the day the monarch was crowned.

Abhisit’s Democrat Party was expected to discuss the plan and the dissolution of parliament at a meeting on Thursday.

“They expect to discuss the reconciliation roadmap which could include a date for House dissolution,” Buranaj Smutharaks, a party spokesman, said.

In a televised speech on Monday, Abhisit proposed fresh polls on November 14 if the red shirts accepted his reconciliation plan and ended their occupation of Bangkok’s main upmarket shopping district.

The monarchy, he said, should not be dragged into politics or “violated”, following government accusations that some red shirts were trying to overthrow the monarchy.

The second condition calls for reforms to address social injustice, the third proposes an independent body to monitor media to ensure unbiased reporting, and the fourth a committee to investigate recent political violence.

The fifth point broaches possible political reforms that could include constitutional amendments and a review of a five-year ban on politicians allied with Thaksin Shinawatra, who was ousted as prime minister in a 2006 military coup.

Thaksin, now in exile to escape jail for a graft conviction, had called on his supporters, many of whom form the ranks of the red shirts, to seek “reconciliation” following Abhisit’s offer.

“Reconciliation is good for everybody,” he said in a telephone call to a meeting of the opposition Puea Thai Party on Tuesday.

“Don’t think about the past but look to the future.”

Thousands of Thais flocked to the Grand Palace on Wednesday to pay tribute to King Bhumibol Adulyadej, the world’s longest-reigning monarch, who was crowned 60 years ago.

The 82-year-old king, who has been in hospital since September, was expected to make a rare trip out of hospital to attend the palace ceremonies, and people lined the roads to catch a glimpse of him.

The red shirts also held a ceremony at their protest camp, with monks offering prayers for the widely revered king. 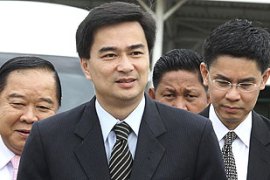 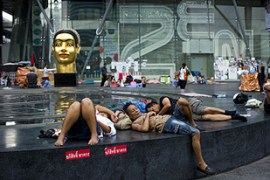 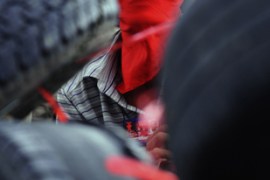 Emergency meeting comes amid fears that the month-long protests could lead to more deaths.