“They had not actually located any oil coming ashore at that time.”

The boats were dropping dispersant into oil streaks, skimming the water’s surface and placing booms to protect the islands.

Suttles said BP projections showed the slick was not expected to reach land for another three days.

According to visual reports from the air, the reddish orange sheen of the slick was broken up into either side of the Chandeleur islands – a chain of uninhabited islets some 90km east of New Orleans that is a prime marsh and wildlife area – and appeared to be lapping the shore.

Coast guard Rear Admiral Mary Landry said while it was expected some surface oil sheen would eventually reach the shore, the containment operation was tracking “heavy pockets of emulsified oil” to prevent them from hitting the coastline.

An estimated 760,000 litres of crude a day has been leaking out of three openings at the wellhead below the Deepwater Horizon rig since it sank on April 22.

There are concerns that powerful sea currents could eventually take the spill to Miami Beach or North Carolina’s barrier islands further south.

BP is preparing to cover the biggest of three leaks with a 98-ton concrete-and-metal box structure and funnel the oil to the surface.

Such an operation has never been tried before in such deep waters.

Satish Nagarajaiah, professor of civil engineering at Rice University in Houston, said it was hard to predict how successful this operation would be.

“I think they will be successful in collecting some amount of oil, bringing it up to a tanker,” he told Al Jazeera.

“But the chances of 100 per cent success, I’m not sure at this point of time because you’re operating in very difficult environments, 5,000 feet under water.”

It will take at least five days before the structure can be operational, meaning another 3.8 million litres of oil could be gushing into the sea.

BP has taken responsibility for the Deepwater Horizon spill, saying it will pay for all clean-up costs and compensation for legitimate claims for property damage, personal injury and commercial losses.

The Pentagon has approved the deployment of more than 17,000 troops from four states to help contain the spill.

Meanwhile environmentalists are worried that oil-dispersing chemicals used in the clean-up could pose a danger to marine life, even as it helps keep the slick from reaching the vulnerable coast.

The US Environmental Protection Agency has approved 14 dispersants for use on oil spills, seen as a trade-off between potential short-term harm to offshore wildlife and possible long-term damage to coastal wildlife habitat.

Sea turtles, dolphins and whales have been seen swimming through the oil slick, and bluefin tuna spawning grounds were not far from its southwest edge as of last Friday, according to the National Oceanic and Atmospheric Administration (NOAA).

Jackie Savitz, a senior scientist at Oceana, told the Reuters news agency that the problem is the dispersants themselves can be toxic to wildlife, and can enhance oil’s toxicity in the dispersion process.

“A decision is being made where it’s the shore wildlife and oysters and beaches versus the animals that live in the water.” 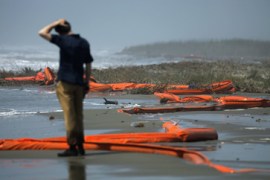 US fishermen struggle to survive

The oil spill threatens the livelihood of many fishermen. 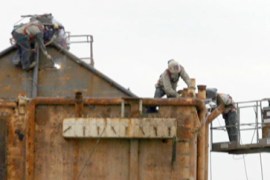 Clean-up of oil spill in the Gulf of Mexico is being hampered by poor weather. 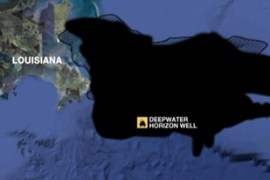 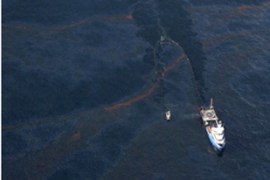 US states braced for oil slick