Kirchner may find that difficult with Christina Fernandez, his wife, being the current president of Argentina and having himself strongly intimated that he will run to succeed her in polls next year.

Kirchner led Argentina through a time of economic renewal and prosperity from 2003 to 2007, but now faces allegations at home that he and his wife established a system of bribes to allow Argentine companies to work in Venezuela.

To become Unasur’s secretary general, Kirchner will have to either renounce his present role as a deputy in Argentina’s Congress or ask for a leave of absence.

The latter is the only option that allows him to keep his congressional immunity from prosecution.

Uruguay had blocked Kirchner’s appointment due to a dispute between the neighbours concerning a bridge over a shared river.

However, Jose Mujica, Uruguay’s president, relented even though he said that it would cost him political capital.

“We support consensus, and we are going to continue doing so, counting on good faith without conditions,” Mujica said.

There was also agreement on a tough new law to tackle illegal immigration in the US state of Arizona, that allows police to detain people they suspect of being illegal aliens.

In a statement, the Union of South American Nations (Unasur) said that the law violates human rights and legitimises “racist attitudes” in US society.

The group also said that the law “increases the latent risk of violence due to racial hate, lamentable episodes that have involved South American victims”. 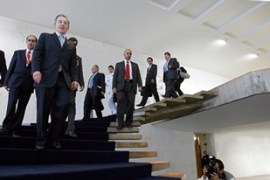