Greece stands on the “edge of the abyss,” Karolos Papoulias, the country’s president, warned on Wednesday, after a day of violent protests against budget cuts and tax hikes left three people dead.

As a general strike – called to vent public fury at the planned measures to avert national bankruptcy – paralysed the nation, demonstrators tried to storm the parliament in Athens, the Greek capital.

The protest became violent, with petrol bombs thrown at police, who responded with pepper spray and tear gas.

Tens of thousands of people took to the streets across the country, angered by spending cuts and tax rises planned in return for a $146bn bailout for Greece.

Clashes erupt on streets while at least one person killed in petrol bomb attack. 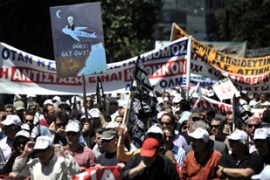