Shortly after dawn Ethiopia’s capital was filled with the sound of loud hailers, the horns of flatbed lorries packed with people and the distorted blast of sound systems playing music.

Roads in Addis Ababa on Tuesday were blocked by paramilitary police in pale blue combat uniforms. A helicopter with a surveillance camera zoomed in on the crowded streets below.

The ruling party had planned it this way well in advance – the heart of Addis to be taken over for celebrations. Tens of thousands of people awaiting the message from one time guerilla fighter turned Africa statesman, father of three, Meles Zenawi.

Twelve hours earlier a posse of media had waited patiently outside a single storey building the size of a school classroom – the place where the National Electoral Board of Ethiopia (NEBE) was to make its pronouncement on provisional results.

It turned out to be a haphazard affair. First Merga Bekana, the board chairman, struggled with spreadsheets beamed onto a rough plaster wall from a projector.

As he decided to abandon the presentation and send a messenger to get a printout of the provisional results, an American reporter barked: “Just tell us who won!”

Meskel Square was a hive of activity. With security forces all around this historic square in darkness, construction work was going on to assemble a dais for the victory celebration – and a position where Meles, the incumbent prime minister, could address his supporters from behind a bullet proof screen.

In the heated atmosphere of the results room, a long list of numbers was finally read out by Bekana. At first he appeared reluctant to announce a provisional winner and then came the words: “Definitely the EPRDF [the Ethiopian People’s Revolutionary Democratic Front] has won. At this point definitely.”

And it was a landslide. The EPRDF had won by a larger margin than many analysts had expected. Their biggest challengers – Medrek, a forum of eight parties – had been decimated.

In advance of Sunday’s poll and during the voting, the opposition had been complaining of ballot stuffing, intimidation, harassment and the blocking of their observers in some of the 43,000 polling stations.

But on this night they were silent. And the next morning it was obvious they were letting the ruling party’s choreographed plans roll out.

They were waiting to hear what foreign observers had to say.

EU election monitors, in two floors of the Addis Hilton Hotel, were busily preparing for its news conference.

Draft copies of their findings had somehow found their way to Zenawi’s office.

I understand from sources that Thijs Berman, the EU chief observer, had been summoned by Zenawi on Monday for a serious dressing down – even a threat of expelling the 170-strong mission from the country.

And so, when on early Tuesday morning Zenawi spoke above the cacophony of his supporters’ wailing and cheering in Medrek Square, these words came in the Amharic language: “The people’s vote will not be overturned by foreign forces.

“Some of our foreign friends have disappointed us but that’s in the past.

“We urge them now to give recognition to the people’s vote. The politics of hate is out. Not one life should be lost in post-election riots.”

What was the opposition position on that statement?

Still no official word as the assembled throng of ruling party supporters became more challenging towards foreign faces. Some of them turned on foreign national journalists, like myself, chanting: “Tell the truth, fair reporting”.

He said the polling had been generally calm and peaceful, and organised in a competent and professional manner. However, in the political atmosphere during the weeks running up to the elections, his observers noted apprehension and insecurity as the number of complaints from the opposition increased.

Then he got to the point: “The title of our preliminary report is high turnout on election day but marred by narrowing political space and an uneven playing field.

“The EU observed the use of state resources for the campaign.

“Insufficient measures were taken to increase the level of trust of some political parties in the NEBE institution, especially at the local level.”

A few hours after his news conference came another EU statement, this time from Brussels.

Catherine Ashton, the EU foregn policy chief, said: “I welcome the peaceful conduct of the elections and I congratulate the Ethiopian voters for showing their commitment to this process with a high turnout.

“The legislative elections in Ethiopia were an important moment in the democratic process in the country,.”

Ashton further said the EU “stands ready to work with Ethiopia to further deepen our relations with the government and the peoples”.

So what should most Ethiopians, and particularly the opposition parties, make of this? Opposition leaders are still considering their next move.

Street protests are ruled out after the deaths of 193 demonstrators and seven policemen following the disputed 2005 election.

Back then the opposition was much stronger. Now the only realistic option is for them to look to the civil courts.

Medrek has an open hand as its campaign symbol, seen as a stop sign for Meles rule.

The EPRDF has a worker bee as its symbol.

The bee has stung the hand convincingly.

But how will this play out with a new government with a massively increased majority?

Ethiopia is a country with an estimated population of more than 80 million people and a massive need to help the vast majority of its people who live on less than $2 a day.

Meles has an answer – more foreign support for aid programmes while he works on the private sector. 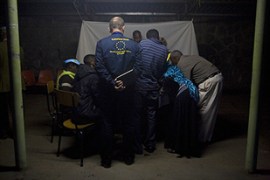 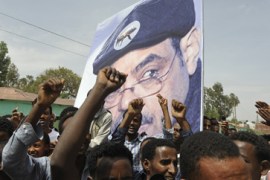 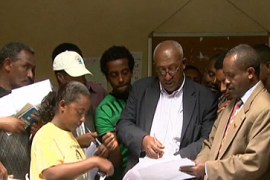 While the opposition is making claims of unfairness, the public mood seems calm.