But Robert Gibbs, the White House press secretary, said in a statement that the deal did not address some of the principal issues the US has with Iran’s nuclear programme, which it says could be a cover for building atomic weapons.

“The United States and international community continue to have serious concerns,” he said.

“Iran said today that it would continue its 20 per cent enrichment, which is a direct violation of UN Security Council resolutions.

“Furthermore, the joint declaration issued in Tehran is vague about Iran’s willingness to meet with the P5+1 countries to address international concerns about its nuclear programme.”

The US criticism largely mirrored that of European Union governments earlier on Monday.

A spokeswoman for Catherine Ashton, the EU foreign policy chief, welcomed the deal but said that the bloc still had “serious concerns” about Iran’s nuclear programme.

“If Iran has now accepted the IAEA proposal, this is welcome, but it does not solve the fundamental problem, which is that the international community has serious concerns about the peaceful intention of the Iranian nuclear programme,” Maja Kocijancic, the EU spokeswoman, said.

“Iran’s actions remain a serious cause for concern, in particular its refusal to meet for discussions of its nuclear programme, or co-operate fully with the IAEA, and its decision to start enriching low enriched uranium to 20 per cent,” he said in a statement issued by the foreign ministry.

The two men who helped negotiate the exchange plan – Recep Tayyip Erdogan, Turkey’s prime minister, and Lula Inacio da Silva, Brazil’s president – have both said that there are now no grounds for new sanctions against Iran.

“My expectation is that after this declaration there will not be a need for sanctions,” Erdogan told reporters in Baku, Azerbaijan.

The agreement aimed to ease Western concerns over Iran’s nuclear programme, and stave off a fourth round of sanctions being pushed by the US and its allies.

After the deal’s announcement, Ahmadinejad called on the permanent members of the UN Security Council, as well as Germany, to relaunch dialogue over Iran’s nuclear programe.

“It is time for the 5+1 countries to enter talks with Iran based on honesty, justice and mutual respect,” he said.

The agreement calls for Turkey to be the conduit for the fuel swap, but as Iran’s neighbour doesn’t possess the technology to enrich uranium, it would instead hold the material as a guarantee.

The highly-enriched fuel would be delivered by the Vienna Group, which includes the United States, Russia, France and the IAEA.

Iran would then – as per the terms of the agreement- use the nuclear fuel rods for its Tehran medical research reactor.

John Large, an independent nuclear consultant, said that the guarantee of Turkish oversight may not be enough reassurance for the international community to agree to hand over fuel rods to Iran.

“Turkey has no facilities whatsoever. It is not a nuclear country, so it has no enrichment facilities, and of course, it doesn’t really have any storage facilities,” he said.

“This deal has to be guaranteed in terms of storage security and transportation security.”

Manouchehr Mottaki, the Iranian foreign minister, said in the event the deal is not implemented, Iran’s uranium would have to be returned straight away.

“Based on the agreement signed this morning, if the swap does not take place, then Turkey will be obliged to send back our dispatched uranium immediately and unconditionally,” he said.

Iran has also not agreed to halt its low-level uranium enrichment, and confirmed plans to continue enriching its remaining stockpile. 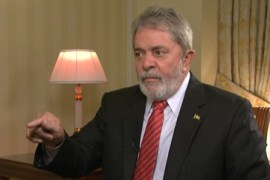 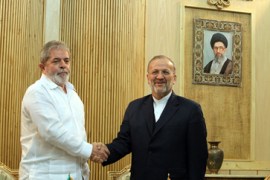