“The resolution also touches upon Iran’s finance and shipping industry, the Revolutionary Guards and contains a blanket ban on Iran from importing any conventional arms.”

Before the resolution was passed out, Clinton said the deal had been reached in co-operation with China and Russia, who have previously resisted calls for a new round of sanctions.

“The fact that [Clinton] pointed out that China and Russia were on board is a big deal for the US, because that was the biggest concern for the Obama administration,” Al Jazeera’s correspondent Patty Culhane said.

In Clinton’s comments on Tuesday, she said Iran was trying to deflect pressure with the fuel swap deal it agreed to on Monday.

Iran and non-permanent security council members Brazil and Turkey said they had agreed on a confidence-building plan for Iran to swap nuclear materials that many believed would blunt the US-led drive for a fourth round of UN penalties on Iran.

The agreement calls for Iran to ship 1,200kg of low-enriched uranium to Turkey, in return for higher-enriched nuclear fuel for a medical research reactor.

Clinton’s announcement on Tuesday came despite an appeal from Recep Tayyip Erdogan, the Turkish prime minister, for the international community to support the fuel swap deal.

“I urge the international community to support the final declaration for the sake of world peace,” Erdogan told a press conference in Spain.

“There is a unique chance before us and I believe we should take this chance.”

But Clinton said it was not an “accident that Iran agreed” to the fuel swap as the US was preparing to move forward with sanctions.

“This announcement is as convincing an answer to the efforts undertaken by Tehran over the last few days as any we could provide,” Clinton told the Senate Foreign Relations Committee.

“There are a number of unanswered questions regarding the announcement coming from Tehran.

The US and its allies say that Iran wants highly enriched uranium to make an atomic weapon, but Tehran says its nuclear programme is simply designed to meet its civilian energy needs. 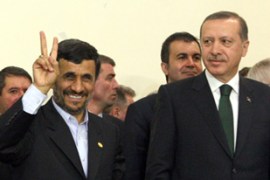 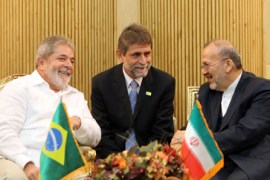 The full declaration agreed by Iran, Turkey and Brazil in Tehran on Monday.