Suthep met DSI officials to hear complaints of “malfeasance which resulted in deaths and injuries of civilians”, according to Tharit Pengdith, the DSI chief. But he faces no formal charges for now.

He said that welcomed the discussion about the response of his Centre for the Resolution of the Emergency Situations to the crisis.

“I am happy to enter the judicial process to show the government is sincere,” he told reporters after the meeting.

“I am not here to meet the red shirts’ conditions. It was already in our original plan.”

It seemed unlikely that the visit would be enough to satisfy the protesters’ demands.

“We want a criminal charge against Suthep as well as [Prime Minister] Abhisit and we want a truly independent committee to be set up to investigate recent political violence,” Weng Tojirakarn, another red shirt leader, said.

Nattawut said that the protesters want “clear signs that the government will acknowledge their part in the violence”.

Suthep has denied he should be held responsible for the deaths on April 10. The incident also wounded more than 800 people.

The government blames the killings on “terrorists” working with the red shirts, whose leaders have promised to turn themselves in to police on May 15 to answer accusations against them.

The latest demand from the protesters threatens to stall a deal to end the long-running demonstration in the capital, despite the protesters accepting a timetable which provides for elections on November 14.

“With the red shirts’ requests, I don’t think November elections are going to happen,” Pavin Chachavalpongpun, a visiting research fellow at the Institute of Southeast Asian Studies in Singapore, said.

“The government has said it will only go forward with November 14 elections if they can bring back some kind of normalcy to Bangkok.”

He told the Reuters news agency that the red shirts’ demands were likely to play into the hands of the government.

The reds shirts consider Abhisit’s administration undemocratic because it came to power in a 2008 parliamentary vote after a controversial court ruling ousted elected allies of Thaksin Shinwatra, who was himself unseated in a 2006 coup.

They have said the government is intent on clinging to power until at least September to ensure the new army leadership line-up is appointed and the national budget is approved in parliament. 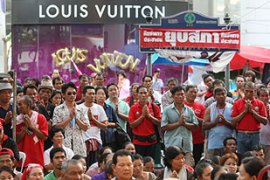