Medvedev’s visit comes against the backdrop of a nearly 18-month-old suspension of Turkish-led peace efforts between Israel and Syria.

There has been a mounting war of words between the two foes over Israeli accusations that Syria has been arming Lebanon’s Hezbollah with Scud missiles.

It also comes as renewed US-brokered peace talks between Israel and the Palestinians ran into difficulties just days after their launch over Israeli settlement expansion in annexed East Jerusalem.

“A further heating up of the situation in the Middle East is fraught with an explosion and a catastrophe,” Medvedev said.

Russia is part of the so-called Quartet working for a Middle East settlement alongside the European Union, the United Nations and the US.

“There is not enough desire” on all sides to find a solution, said Medvedev. “This desire needs to be stimulated.”

The Russian president said that was a role that Moscow could and would take upon itself.

Medvedev also met with Khaled Meshaal, the political chief of Hamas who lives in exile in Damascus.

She spoke to reporters after Medvedev and al-Assad met the Hamas supremo in Damascus earlier in the day.

Meshaal has said that Shalit will not be freed unless Israel releases hundreds of Palestinian prisoners.

Medvedev also indicated that Russia may help build a nuclear power plant in Syria, saying: “Co-operation on atomic energy could get a second wind.”

Assad said he and the Russia president had “talked about oil and gas co-operation, as well as constructing conventional or nuclear powered electricity stations.”

Asked whether Russia would build an atomic power plant in Syria, Sergei Shmatko, Russia’s energy minister, said: “We are studying this question.”

Syria is under investigation by the International Atomic Energy Agency for a suspected nuclear site that Israeli warplanes destroyed in 2007.

Damascus said the site was a conventional military complex.

The nation has been plagued for years with huge electricity shortages, with power generation falling one-third short of demand and the population expanding at 2.5 per cent a year.

The president called on Medvedev “to contribute in making the Middle East an area free from weapons of mass destruction, particularly nuclear weapons,” the agency said.

Medvedev said that the end result of Middle East peace talks needed to be the liberation of occupied Arab territories and the creation of an independent Palestine that could co-exist peacefully with Israel.

For Syria, the return of the strategic Golan Heights, which Israel seized in the Six-Day War of 1967 and annexed in 1981 in a move never recognised by the international community, is a non-negotiable condition of any peace agreement.

Turkey, Medevdev’s next port of call after Damascus, brokered indirect negotiations between Syria and Israel in 2008 in a bid to kickstart US-brokered direct talks.

But they were broken off when Israel launched a devastating offensive against the Gaza Strip in December that year in a move that strained relations with Ankara as well as Damascus. 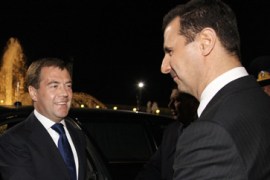 Russia’s role in the Middle East

Medvedev’s visit to Syria aims to expand Moscow’s influence in the volatile region. 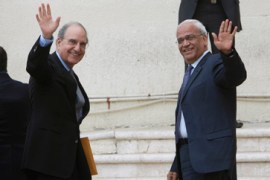 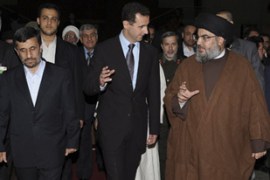 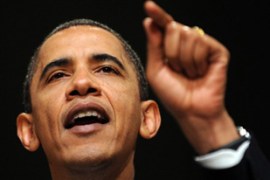 US president calls country an “extraordinary threat” to US security and foreign policy.