Valery Korchagin, the emergencies ministry spokesman in the region, said 19 of the dead were rescuers who went into the sprawling mine after the initial blast.

The first blast occurred late on Saturday as about 350 people were working underground in the mine in Siberia’s Kemerovo region.

Just hours later – after rescuers had entered the mine – a second explosion occurred, trapping both the remaining miners and the rescue workers.

Earlier in the week, Shoigu said rising water levels in the deep mine gave rescuers a maximum of 48 hours to reach about 13 people trapped in two locations.

The Raspadskaya mine, which is 500 metres deep and has 370km of underground tunnels, produces about eight million tonnes of coal a year, according to the company’s website.

Mine explosions and other industrial accidents are relatively common in Russia and other former Soviet republics, and are often blamed on inadequate implementation of safety precautions by companies or by workers.

In December, nine people were killed in an explosion at an iron-ore mine in the Urals Mountains region that was blamed on faulty transportation of explosives.

In 2007, a blast at the Ulankovskaya coal mine, also in Kemerovo, left more than 100 people dead.

The authorities had announced in the aftermath of that blast that all surrounding mines would be checked for safety. 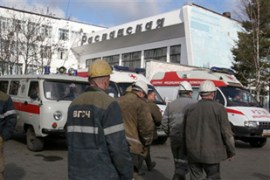 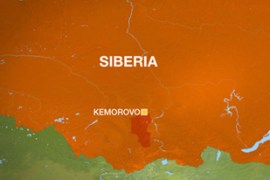 Deaths in Russian mine blast

Seven dead and dozens trapped after explosion at coal mine in Siberia.