“Once we gather as many names as possible we will put it forward and bring about real change,” he said.

The petition also calls for the emergency law that allows detention without charge and bans anti-government political activity like ElBaradei’s public speech to be revoked.

“We seek peaceful reform by rallying large numbers of supporters for change. We seek constitutional amendments and free and fair elections,” ElBaradei said.

“The Egyptian citizen has the right to choose his president.”

Egyptian police often break up gatherings of more than five people but Friday’s events went ahead without interruption.

“We received instructions from the interior ministry to allow the rally and gathering to go smoothly,” a security officer at the speech said.

The gathering in Mansura, a university town between Cairo and the Mediterranean Sea, drew students dressed in shirts bearing his image, as well as doctors, taxi drivers, engineers and housewives.

“There are thousands of alternatives in Egypt, ElBaradei is proof.”

ElBaradei said his aim was to bring as many people as possible to the streets.

“What we saw today is the writing on the wall,” ElBaradei told the Reuters news agency.

“The average Egyptian is out on the street calling for change, and this destroys the myth that this movement is by the elite or is just a virtual one on the internet.”

Political analysts say the chances of securing constitutional change by next year are remote, with Mubarak’s ruling National Democratic Party dominating political life in the most populous Arab nation.

“The regime is clever this time because it knows that with ElBaradei the rules of the game are different,” Yahya Al Gamal, a professor of law professor, told Reuters.

“International public opinion is following ElBaradei’s every move so the Egyptian government is being smart and behaving in an intelligent way.”

Mubarak, 81, who has ruled since 1981, has not said if he plans to run for a sixth six-year term in 2011, but many Egyptians speculate that he will seek to hand power to his son Gamal.

“The idea that Bin Laden and company are the only alternative to authoritarian regimes is a fake one,” he said.

“People feel repressed by their own governments, they feel unfairly treated by the outside world, they wake up in the morning and they see Muslims from Afghanistan, Iraq, Somalia, Sudan and Darfur being shot and killed.”

“It has not been based on dialogue, understanding, supporting civil society and empowering people, but rather it’s been based on supporting authoritarian systems as long as the oil keeps pumping.” 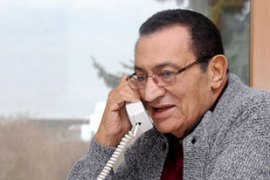 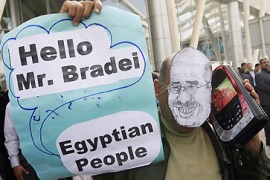 Can the former IEAE chief overcome years of “hopelessness” in Egypt’s political system?