Al Jazeera’s Alan Fisher, in London, said that Hague had not mentioned one of the key sticking points between the parties.

“What they didn’t mention could be the key point between the two sides, which is reform of the electoral system.”

The Liberal Democrats want to secure electoral reform in any deal, because they would win more seats in parliament if the voting system were to be changed from first-past-the-post to proportional representation.

The Conservatives do not want to make such changes, believing that it will severely limit their ability to rule independently in the future.

Although the Conservatives won the most votes in last Thursday’s poll, they failed to gain a majority, providing the Liberal Democrats, who came third in the ballot, with the opportunity to form a government with them or the incumbent Labour.

As his senior officials were meeting with Conservatives, Nick Clegg, the Liberal Democrat leader, held a secret meeting with Gordon Brown, the Labour prime minister.

Brown left Downing Street by the back door to meet with Clegg for the talks. He has offered Liberal Democrats electoral reform in exchange for coalition support, and is awaiting a decision.

The meeting comes after Clegg met David Cameron, his Conservative counterpart, for 70 minutes on Saturday.

However, conflicting views on integration with the European Union, defence and immigration could scupper any deal between the Liberal Democrats and Conservatives.

Final results of Thursday’s election gave the opposition Conservatives the lead with 306 seats in parliament, while Labour trailed second with 258 and the Liberal Democrats took 57.

One further seat is to be decided on May 27.

The results left the Conservatives 20 seats shy of the 326 needed to form a majority government. With 57 seats, the Liberal Democrats could more than make up for the shortfall.

If the two parties fail to find common ground, Cameron could go it alone, but a minority government could find it harder to pass laws.

Financial markets are keen for government to be formed as soon as possible in order that the UK can push ahead with economic reforms, but a deal seems unlikely to be struck for several more days yet. 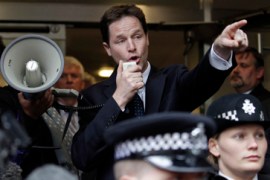 Nick Clegg at centre of negotiations to form government despite coming third in elections.

Prime minister offers alliance talks with other parties, indicating he will not step down.