Al Jazeera’s Veronica Pedrosa, reporting from the capital Manila, said according to the national election commission, testing of the new memory cards on Saturday went well and there were no new reports of faulty machines so all systems were a go for Monday’s polls.

In the past four months, at least 24 people have been killed in election-related violence, according to police, and our correspondent said there continued to be scattered reports of political violence.

Liquor sales were banned for 48 hours from midnight on Saturday to reduce the chances of alcohol-fuelled violence, while security forces have set up checkpoints to arrest illegal gun holders.

In the presidential race, opinion polls indicate that Benigno Aquino III, a senator and the son of one of the country’s democracy icons, has a two-to-one lead over his nearest rival, Joseph Estrada, the former movie star and ousted president.

But Aquino, whose father, Benigno Aquino Jr, was assassinated by soldiers in 1983, told thousands of supporters at a Manila rally on Friday that “this fight is not yet over”.

Aquino’s father was killed moments after stepping off a plane on his return from US exile to organise opposition to Ferdinand Marcos, the then president.

The killing triggered massive protests that culminated in the “people power” revolt in 1986 that toppled Marcos and installed widow Corazon Aquino as president.

Aquino’s presidential bid was launched in the wake of an outpouring of sympathy for his family following the August 2009 death of his mother, Corazon.

The 50-year-old bachelor said he was confident he would win if the people are “allowed to vote and their votes are counted properly”.

Estrada, 73, who was impeached, forced to step down amid massive anti-corruption rallies in 2001, and convicted of plundering the state before being pardoned by his successor, Gloria Arroyo, was “very optimistic” about his chances, Margaux Salcedo, his spokeswoman, said on Friday.

“He perceives this election as a way to vindicate himself and the Filipino masses,” she said.

Also seeking the presidency is Manuel Villar, 60, another senator and the country’s wealthiest politician.

A survey by the respected Social Weather Stations on May 3 gave Aquino 42 per cent support followed by Estrada with 20 per cent and Villar, 19.

“The problems before us were caused by people putting their own selfish interests before the common good,” Aquino told thousands of supporters on Friday.

Arroyo, who is required by constitutional term limits to step down, is due to hand over power on June 30.

But she is running for a seat in the lower house of congress, a contest she is expected to win.

Also in the mix is former first lady Imelda Marcos, 80, who gained global notoriety when thousands of her shoes were found in the presidential palace after her late husband Ferdinand’s overthrow.

She is running for a seat in the lower house of congress as well.

World welterweight boxing champion Manny Pacquiao, 31, is aiming for a similar position in the southern island of Mindanao, where the country’s worst-ever election-related violence occurred in November, when 57 people in a convoy, including 31 journalists, were abducted and executed over a suspected power struggle between two clans.

Many question reliability of scanning machines to be used to speed up counting of votes. 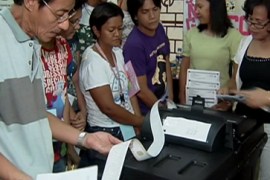 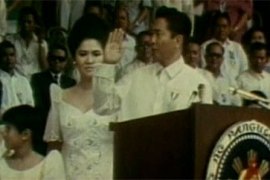 Manny Pacquiao is running for a seat in congress in the upcoming elections. 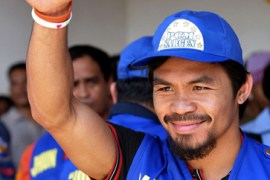 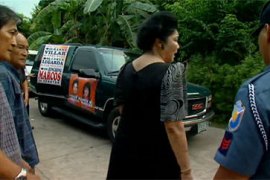