Two Reuters journalists were among the 12 people killed in the July 12, 2007 attack.

Captain Jack Hanzlik, a spokesman for US Central Command, said on Tuesday that the military has not been able to locate the video within its files after being asked to authenticate the version published by Wikileaks.

“We had no reason to hold the video at [Central Command], nor did the higher headquarters in Iraq,” he said in an e-mailed statement to The Associated Press.

“We’re attempting to retrieve the video from the unit who did the investigation.”

US defence officials meanwhile said lawyers at Central Command have been reviewing the footage to see whether the rules of engagement were followed.

“We’re looking at a reinvestigation because of a question of the rules of engagement,” an official told the Reuters news agency on condition of anonymity.

He said lawyers would be examining whether the actions depicted in the video were in parallel with the rules of engagement in effect at the time.

But on Wednesday Central Command said it has no immediate plans to reopen an investigation into the incident, amid appeals by rights groups for a renewed probe.

“Central Command has no current plans to reinvestigate or review this combat action,” Rear Admiral Hal Pittman, the director of communications at Central Command, which oversees the war in Iraq, said in a statement to Reuters.

Pentagon officials have said detailed rules of engagement are generally kept classified to avoid tipping off adversaries about US tactics on the battlefield.

Some international law and human rights experts who have watched the video say the Apache helicopter crew in the footage may have acted illegally.

They raised concerns about how the helicopter pilots operated, particularly in firing at a van that had apparently arrived on the scene after the initial attack to help the wounded.

Transparency advocates have questioned the withholding of the video from the public, even though the Reuters news agency requested a copy through the Freedom of Information Act after watching it in an off-the-record meeting with the military in 2007.

The two Reuters employees killed in the attack were photographer Namir Nour El Deen, 22, and his assistant and driver Saeed Chmagh, 40.

An internal US investigation concluded that the troops had acted appropriately, despite having mistaken the camera equipment for weapons.

David Schlesinger, Reuters’ editor-in-chief, said: “I would welcome a thorough new investigation. Reuters from the start has called for transparency and an objective inquiry so that all can learn lessons from this tragedy.”

Al Jazeera’s Patty Culhane reporting from Washington, said one of the recommendations in the military investigation report was for the tape to be kept for training purposes.

“Technically they were supposed to keep a copy…  they just can’t seem to find it right now,” she said.

Our correspondent said US television networks have also begun playing the tape, which had mostly been ignored until now, and she said that if domestic US media kept up the pressure the military may decide to reopen the case.

The video been widely viewed online, with a version on Youtube watched 4.1 million times, and has sparked an intense debate over US forces in Iraq and the actions of the troops who opened fire.

US military officials have said they believe the video is authentic.

The video was taken by the tactical unit that operated the helicopters, only identified as a “1st Air Cavalry Brigade”, which reported to the Multinational Division in Baghdad.

The video includes an audio track of the conversation between the helicopter crew, and many who have seen it have been shocked at the images and at some of the fliers’ comments.

It includes audio of troops calling to “light ’em up!” and referring to the men as “dead bastards”.

“Clearly, it is unflattering to the military, but that is not justification for withholding it,” Steven Aftergood, an expert on government secrecy with the Federation of American Scientists told The Associated Press. 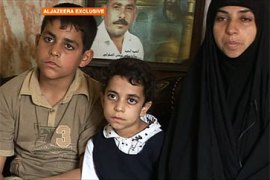 Iraq outrage over US killing video

Families of victims seek justice over a 2007 US air raid in Baghdad caught on tape. 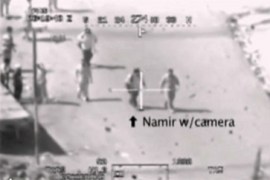 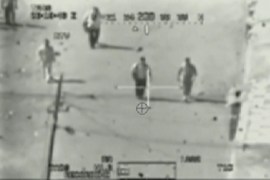 Al Jazeera finds inconsistencies in Pentagon’s investigations into US attack on Iraqis. 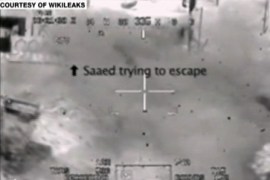 Video shows ‘US attack’ on Iraqis

WikiLeaks footage believed to show US military shooting on crowded Baghdad square in 2007.