The emergency decree allows security officials to detain suspects without charge for up to 30 days, and gives them the option of imposing curfews, banning public gatherings and censoring media.

Al Jazeera’s Wayne Hay, reporting from Bangkok, said that the protesters camped in the capital continue to ignore the massive security presence.

“They have completely disregarded the state of emergency that is now in place and have vowed to hold more rallies,” he said.

The emergency decree came after hundreds of red shirt protesters briefly broke into parliament, scuffling with police and forcing MPs to flee the building.

Some senior officials were evacuated by military helicopter as hundreds of protesters pushed past security forces at around midday on Wednesday, using a lorry to ram the gates to the parliament compound.

Other MPs rushed to climb walls at the back of the compound in an effort to escape.

It is the fourth time since 2008 that emergency law has been declared in the capital because of political turmoil.

Abhisit has faced criticism for failing to take stronger measures to end the demonstrations. He has previously entered negotiations with the red shirts and ordered security forces to pull back from possible confrontations.

On Thursday, he called off a planned visit to Vietnam for a meeting of southeast Asian leaders because of the situation, which investors fear could derail the country’s high-performing economy.

“The prime minister has cancelled his trip to the Asean summit to wait and watch the situation here,” Satit Wonghnongtaey, the minister attached to the premier’s office, said.

Meanwhile, Thai authorities have shut down a television channel run by the red shirts.

“We have successfully shut down the People’s Channel (P-TV),” Satit told the AFP news agency.

He said the station had been taken off air for inciting unrest.

“It is an evil measure by a dictator government,” Nattawut Saikuar, a red shirt leader, said.

“The government wrongly thinks that cutting the signal will stop reds from gathering. We give final word to the government to connect our signal within today, otherwise people will fight for their rights.”

The red shirt movement supports the ousted prime minister Thaksin Shinawatra, and see Abhisit, an Oxford-trained economist, as a stooge controlled by the unelected establishment and the military.

They say the prime minister – who came to power in a 2008 parliamentary vote after the courts dissolved a pro-Thaksin party in government at the time – should call an election and let the people choose their government. 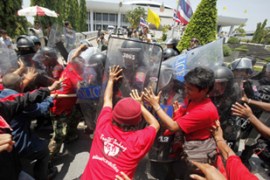 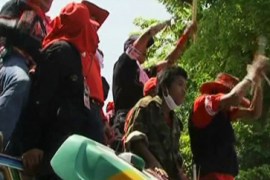 Protesters vow to take action “to next level” as they push harder for PM to quit. 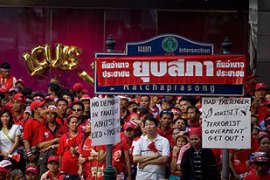 Thai protests to hit ‘next level’