A new nuclear disarmament treaty has been signed by Dmitry Medvedev, the Russian president, and Barack Obama, his US counterpart.

The Strategic Arms Reduction Treaty aims to reduce the number of deployed warheads by 30 per cent from the levels set in the last major US-Russian disarmament treaty in 2002, specifying limits of 1,550 nuclear warheads for each of the two countries.

Why is the treaty important?

Under the agreement, US and Russian governments have established a bridge for substantive arms reductions in the future.

They have also demonstrated to the rest of the world that they are capable of giving up at least some of the weaponry they want others, like Iran, to forgo.

But the treaty is unlikely to rid the world of nuclear weapons.

Richard Weitz, the director of the Hudson Institute’s Center for Political-Military Analysis, told Al Jazeera that the treaty, in terms of nuclear cuts, is a step in the right direction.

“In terms of the reductions themselves, the treaty is not so substantive, it is, however, a modest confidence boosting measure,” he said.

What is getting cut and how much?

The new treaty applies to one category of nuclear weapons – those designed to strike from long distances.

The treaty limit is 700 warheads, but allows seven years to get there.

For the US, this will mean a reduction of the 288 warheads fitted on intercontinental-range missiles aboard Trident submarines, 400 fitted on similar missiles stationed in underground launch silos in the Midwest and 60 carried by two types of bombers: the B-2 and the B-52.

The Russian strategic force is weighted more towards land-based weapons which are believed to be fewer than 600 already.

What about nuclear warheads?

Those are counted differently. The agreed limit for both sides is 1,550.

The way warheads are counted is different in the new treaty.

The US previously counted an unspecified number of warheads – perhaps as many as 500 – designed to be carried by its bombers. The Russians, however, did not count any in that category because the Moscow Treaty did not require it.

The new treaty takes an entirely different tack. Each bomber aircraft counts as one warhead regardless of how many bombs it is capable of carrying.

Is every other nuclear weapon counted?

Hardly. The US has an estimated 6,700 nuclear warheads in reserve and awaiting eventual dismantlement – none of which count against the 1,550 total. The Russians have a similar number in that not-counted category.

Another category that is not covered is short-range nuclear weapons. The US has an estimated 500, of which about 200 are based in Europe. The Russians have perhaps 2,000, all based on their own territory.

The US administration announced on Tuesday that it will push the Russians to negotiate limits for short-range as well as long-range weapons, once the new Strategic Arms Reduction Treaty is signed and ratified by both countries.

Is ratification a sure thing?

No, but prospects appear bright at this stage. The Obama administration needs 67 votes in the Senate.

More than one committee may hold hearings on the treaty, but the panel that has sole jurisdiction to write a resolution of ratification is the Senate Foreign Relations Committee, headed by Democrat John Kerry of Massachusetts, who strongly supports the treaty.

Richard Lugar of Indiana, the committee’s ranking Republican, also has indicated he will support it. The White House, however, is not expected to submit the actual treaty and its detailed annexes to the Senate for some weeks.

The Russian parliament must also approve the treaty, but as long as the Kremlin supports the pact, legislative approval is expected to be a formality. Upon ratification, the treaty is to remain in force for 10 years. 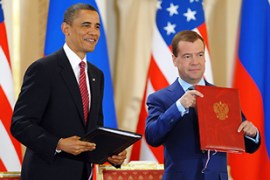