“We can confirm that the president has left the capital. He’s gone south to his heartland … where he’s from,” he said.

“We also understand that the prime minister has resigned and he was escorted safely from the White House, which is the Kyrgyz presidential administration building in the centre of the capital.

“So what appears to be the case is the Bakiyev government is no more in Bishkek. But the government has been effectively relocating to the south of the country.”

Forestier-Walker said the news came after opposition members commandeered one of the main government television stations earlier in the day.

“They came on air and talked about the situation, appealing for calm and appealing for people to protect small businesses and shops from looters,” he said.

“But most significantly, they described having formed a people’s assembly and that they’ve appointed someone to take charge of Bishkek, which more or less means that they’re saying, ‘We’re in charge. We’re in control. We’re now the government’.”

The announcement came after hours of violent clashes in Bishkek, in which at least 40 people were killed and more than 400 others wounded, Kyrgyzstan’s health ministry said.

But the opposition said at least 100 people had died.

Thousands of protesters angry over corruption and rising utility bills had earlier seized government buildings and clashed with riot police who fired tear gas, rubber bullets and flash grenades at the crowd.

Our correspondent said the protesters’ grievances are a mixture of political and economic frustrations.

“When it comes to real frustration, it’s the economic problems that really motivate people. The key turning point may have been the imposition of new utility bill tariffs,” he said.

“People’s energy bills doubled overnight in January and that caused serious consternation among a significant part of the population who are largely poor by international standards.

Authorities declared a nationwide state of emergency following the violence.

Wednesday’s unrest came a day after thousands of people in the northwest town of Talas stormed regional government offices.

Hundreds of demonstrators then gathered around a local police station and threw Molotov cocktails at portraits of Bakiyev.

Omurbek Tekebayev, the leader of opposition party Ata-Meken, said the protest in Talas was part of a wave of rallies planned by the opposition to put pressure on Bakiyev to meet their demands.

The unrest comes amid rising tensions between the opposition and Bakiyev’s government, which they accuse of cracking down on independent media and fostering corruption.

Bakiyev came to power five years ago after street protests led to the country’s so-called Tulip Revolution which ousted his predecessor.

Bruce Pannier, a journalist and Kyrgyzstan expert with Radio Free Europe Radio Liberty in Prague, said Bakiyev promised to reform the country when he came into office five years ago.

“[But] his fight against corruption hasn’t really gone very far in the government,” he told Al Jazeera.

“As far as him combating nepotism, the people in Kyrgyzstan know that Bakiyev appointed several of his brothers to state positions and that his son is actually running the Kyrgyz economy.

Earlier this month, a Kyrgyz court shut an opposition newspaper and banned two newspapers close to the opposition, fining them $111,000 for allegedly insulting Bakiyev. 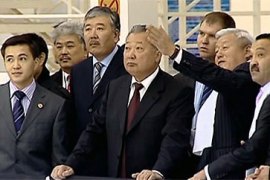 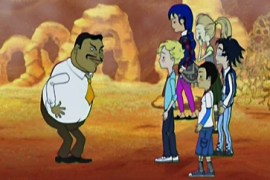 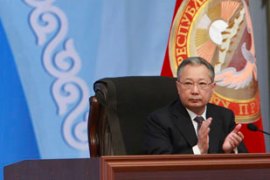 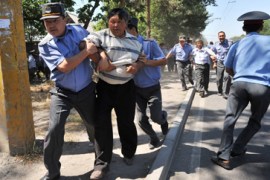 Rights organisations say the press and opposition are being repressed in Kyrgyzstan.