Sudan’s president has said that he will allow Jimmy Carter, the former US president, and his election observers full access in the country during Sunday’s vote.

Omar al-Bashir made the comments at a rally on Wednesday after claims of irregularities and a boycott in the northern states by the Sudanese People’s Liberation Party (SPLM), Southern Sudan’s main political party.

The SPLM’s announcement on Tuesday has added to concerns over the credibility of the legislative, local and presidential polls, after accusations of fraud earlier this week.

“In two days, President Carter will arrive and I will receive him and will give him and his centre premission to go to any area of Sudan and to monitor any area in Sudan,” al-Bashir said at a event in the north that was broadcast on state television.

The developments come as the EU says it will withdraw its monitors in the western Darfur region over concerns for their safety and that their work might be restricted.

Fighting in the area between opposition groups and the government since 2003 has killed about 300,000 people and displaced millions more.

“I have decided to go back with all the team of six observers that were still in Darfur,” Veronique de Keyser, head of the EU mission, said when leaving Darfur by aircraft on Wednesday.

“It’s always sad to leave this region which is such a poor region but I really knew when I came that to observe elections here, it’s impossible in a credible way.

“There are many safety limitations.”

Al-Bashir has threatened to cut off election observers’ “fingers and tongues” if they try to delay the presidential, legislative and local polls.

The SPLM currently shares power at the federal level with al-Bashir’s National Congress Party (NCP) under a 2005 peace accord.

Opposition groups have accused the government of only holding the election to re-elect al-Bashir to assist him in the face of an arrest warrant from the International Criminal Court (ICC).

The ICC, based in The Hague, Netherlands, has charged al-Bashir with war crimes for alleged attrocities in the conflict in Darfur.

The Democratic Unionist Party (DUP), one of Sudan’s two main opposition groups, said on Tuesday it would present Hatim al-Sir as its presidential candidate, after an initial decision to boycott.

The other major opposition group, the Umma party, is expected to announce its level of participation in the election later on Wednesday, after it had given al-Bashir a list of conditions, including  freezing “repressive” security measures and pushing back the  election date.

Reporting from Khartoum, the country’s capital, on the SPLM’s boycott decision, Al Jazeera’s Mohammed Adow said: “It leaves the elections in tatters and also it means that its credibility is affected.

“President al-Bashir is one of the only few credible participants in the elections … [and] the Umma party is now deciding whether to withdraw.”

But speaking to Al Jazeera on Wednesday, Omar Rahma, a member of al-Bashir’s NCP who is the government’s spokesperson at the ongoing Darfur peace talks in Doha, said Sunday’s vote must go ahead because “it is the aspiration of the people” of Sudan.

“SPLM has decided to pull out simply because they know that they are not going to win the presidency. Their chances are meagre actually of winning any seats in the parliament in the north,” he said.

“This is what you hear always from a potential loser in a race. They claim that it is fraudulent, that it is fixed, rigged … They don’t have any proof of that.”

Vote to go ahead

Sudan’s election commision said on Tuesday that the vote would go ahead, while about 50 people protested outside its offices demanding “free and fair” elections.

Sunday’s vote is the first general election to be held in the country for over two decades.

The Umma and the DUP took first and second place respectively in the last elections in 1986.

Sudan has suffered two civil wars between the north and south of the country over the past five decades, in addition to the Darfur conflict. 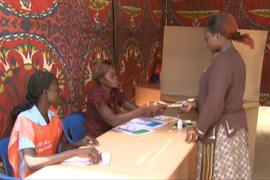 Process unlikely to be easy in a region where a majority of the population is illiterate. 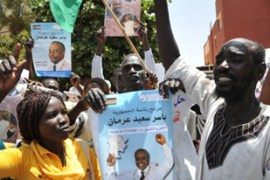 US expresses concern over “restrictions” on political parties in run-up to elections. 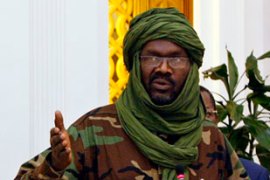 Sudan parties to decide on boycott

Opposition groups set to announce this week whether to participate in April election.