“Each and every person who attempts to enter them will be at enormous risk.”

The rains caused flights in and out of the city to be cancelled or delayed, and schools were closed.

Al Jazeera’s Lucrecia Franco, reporting from Rio de Janeiro, said most of the casualties were caused by mudslides.

“Ten thousand houses remain at risk mostly in the slums, with one fifth of the population living in shacks that are vulnerable. So the situation is critical,” he said.

“The mayor has urged people to leave the risk areas but they have nowhere to go.

“It is impossible to more around the city the streets are rivers. He has told them not to go to risky areas but they live on risky areas.”

In January, scores of people were killed in landslides in Rio de Janeiro state, many in the island resort of Ilha Grande when a hillside collapsed after torrential rains. 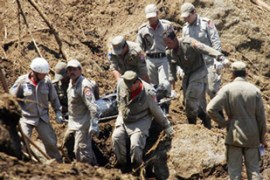 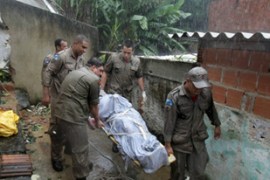 Heavy rain causes hillside to fall on homes and an exclusive hotel on New Years Day.