Chinese officials were also angered by the Dalai Lama’s expression of sympathy towards ethnic Uighurs living in China’s western region of Xinjiang.

In the same speech he referred to the region as “East Turkestan”, the name given to it by pro-independence groups.

“Let us also remember the people of East Turkestan who have experienced great difficulties and increased oppression,” he told about 3,000 Tibetans in Dharamsala, the northern Indian hill town that is home to the Tibetan government in exile.

“I would like to express my solidarity and stand firmly with them”.

The comments drew a backlash from the Chinese-appointed mayor of Lhasa, the Tibetan capital, who said the Dalai Lama was trying to tie the cases of Tibet and Xinjiang together for his own ends.

“He is just using Xinjiang and Tibet as platforms to achieve his goal to separate China,” Doje Cezhug said in remarks carried by the official China Daily newspaper.

The paper also quoted Padma Choling, China’s newly appointed Tibet governor, who said simply: “Let (the) Dalai Lama say whatever he wants. We will just carry on what we do”.

Chinese authorities in Xinjiang have conducted a heavy-handed campaign against what they call violent separatist activity by some Uighurs and last year clashes between Uighurs and ethnic Han Chinese killed at least 200 people.

Chinese officials have repeatedly accused the Dalai Lama of having independence ambitions for Tibet, but he denies the charges, saying he seeks only meaningful autonomy for the remote region.

In 2008, protests led by Buddhist monks against Chinese rule in Tibet gave way to violence, with rioters torching shops in the capital Lhasa and turning on local residents.

At least 19 people died in the unrest, and pro-Tibet groups abroad say more than 200 Tibetans died in a subsequent crackdown across the region.

Beijing has denied the allegations and said it used minimal force.

The anniversaries have also prompted a series of anti-China protests by Tibetans living in exile.

In the Nepalese capital, Kathmandu, on Wednesday about 1,000 Tibetan exiles chanted slogans and waved Tibetan flags at a temple on the outskirts of the capital, as riot police were deployed to keep protesters from marching in the streets.

“Stop killings in Tibet. We want a free Tibet,” the demonstrators chanted. Police detained seven people at the temple for defying a ban on anti-China protests.

Separately, about 15 protesters who tried to break through heavy police lines and storm the Chinese embassy visa office were stopped and detained. 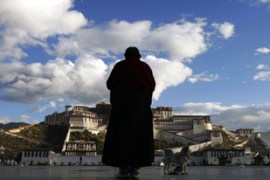 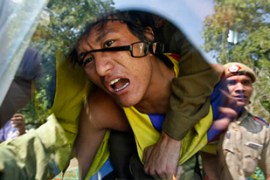 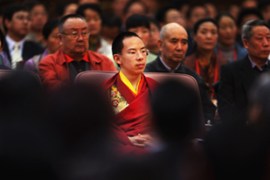 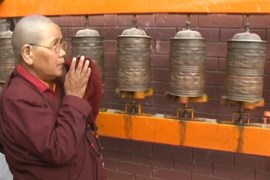 China puts pressure on Kathmandu to clamp down on Tibetan political activists.