Quirk said the initial report was that the ship’s main engine room had been breached, the major engine damaged and the rudder seriously impacted.

One tug boat was already at the scene to stabilise the vessel and another was to arrive later on Monday, while aircraft are being used to monitor the spill in waters teeming with marine life.

Anna Bligh, the premier of Queensland state, said the ship was in a restricted zone that was “totally off limits” to shipping and the ship’s Chinese owners could be fined up to A$1m ($920,000) and the captain handed a A$250,000 fine.

She said that salvage crews were assessing how they might refloat the carrier stranded some 70km east of the Great Keppel resort island, but warned that the operation could take weeks.

“This is going to be a very specialist and delicate operation,” she told Australia’s Nine news network.

Bligh had earlier said there was “a very real risk that the vessel may break apart” and the authorities fear an oil spill will damage the world’s largest coral reef.

“If this ship was to break further apart, if there was another very significant oil spill, then we would not only see tonnes of oil into the Great Barrier Reef Marine Park but modelling shows it is likely to come up onto the beaches of Shoalwater Bay, which is a national park area,” Bligh said.

The vessel hit Douglas Shoal, in a protected part of the Great Barrier Reef Marine Park, 15km outside the nearest shipping channel and where shipping is restricted by environmental law.

Conservationists expressed outrage that bulk carriers can travel through the reef without a marine pilot with local expertise and Larissa Waters, a spokeswoman for the environmentally focused Queensland Greens political party, said the state government was “being blinded by royalties and their short-sightedness will go down in history as killing the reef”. 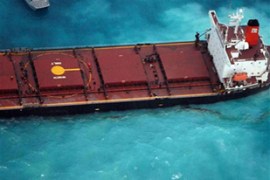 Chinese vessel leaking oil after running aground on the Great Barrier Reef.