But he has his work cut out as Greek unions have called a series of strikes in the days ahead, with a general strike on May 5, saying the involvement of the EU and IMF was a disaster and that the government had crossed the line.

Greek trade union officials voiced outrage at the conditions for the loans after a meeting with Papandreou, saying the IMF wanted the government to raise sales taxes, scrap bonuses amounting to two extra months of pay in the public sector, and accept a three-year pay freeze.

“They want Greece to cut the deficit by 10 percentage points in 2010 and 2011 … so that Greece can go back and borrow on markets in the third year of the programme,” said a union official who requested anonymity.

Officials from the International Monetary Fund, the European Union and the European Central Bank are in marathon talks in Athens over bailout plans, hoping to have a deal by early next week in a bid to prevent the crisis from spreading to other debt-burdened EU countries.

Economists said eurozone states could end up footing a bill of half a trillion euros ($650bn) to save several nations if they failed to engineer a Greek bailout that calmed markets.

But markets appeared confident the deal would work on Thursday and Greek shares jumped 7.14 per cent by the close of trading and the interest rate that Greece has to pay to sell new debt fell back to below 10 per cent.

New signs that Germany could back the deal also helped global stocks and the euro stabilise after days of losses caused by the demotion of Greek debt to “junk” status and the downgrading of Portugal and Spain’s credit ratings.

Germany has expressed deep reservations about handing over loans to Greece, which previously misled the EU over its catastrophic finances, and is demanding fierce budget rigour in return for any cash.

But Wolfgang Schaeuble, the German finance minister, said there was no alternative to aiding Greece to protect the euro, in apparent reference to growing fears of a domino effect of the debt crisis across the EU.

“We have to go this route,” Schaeuble said in Berlin on Thursday. “We are not defending Greece, we are defending the stability of our currency.”

Meanwhile Germany’s opposition accused Angela Merkel, the German chancellor, of political manoeuvring by delaying a decision on aid for Greece until after the May 9 polls.

“The chancellor tried to put off the Greece problem until after the NRW election,” Hannelore Kraft, head of the Social Democrats (SPD) in the state of North Rhine-Westphalia (NRW), Germany’s largest opposition party, told the Westfaelische Rundschau in an interview to run on Friday.

Merkel’s conservatives, who need to win in NRW to retain their majority in the Bundesrat, or upper house of parliament, are concerned that funding a Greek bailout will cost it votes in the polls.

Meanwhile on Thursday, Greece received some reprieve when ratings agency Moody’s Investors Service said it would hold off on a possible downgrade of the country’s credit rating until it can consider details of a rescue package.

It warned, however, that a “multi-notch downgrade” remained likely, which would make Moody’s the second major rating agency, after Standard & Poor’s on Tuesday, to downgrade Greece’s ratings to “junk” status. 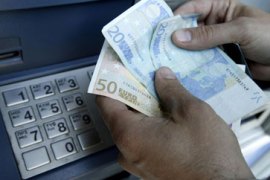 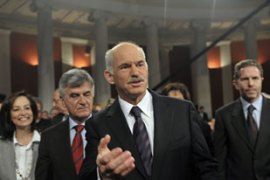 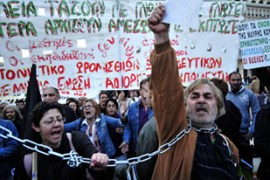