“Surely there is no law, ethical guideline or moral injunction against profit,” Levin said.

“But Goldman Sachs didn’t just make money. It profited by taking advantage of its clients’ reasonable expectation that it would not sell products that it did not want to succeed,” he said.

The senator told Blankfein: “They’re buying something from you, and you are betting against it. And you want people to trust you. I wouldn’t trust you.”

But Blankfein, the final witness at the day-long hearing, denied such a conflict.

“We do hundreds of thousands, if not millions of transactions a day, as a market maker,” he said, noting that behind every transaction there was a buyer and a seller, creating both winners and losers.

The panel accused the Wall Street giant of inflating the housing bubble earlier this decade and then profiting from its collapse in 2007, alleged behaviour surrounding complex mortgage deals that led to the US government filing civil fraud charges against Goldman this month.

The panel said Goldman helped to package toxic mortgages into bonds for fees from 2004 to 2007, and then repackaged those bonds into complex securities known as collateralised debt obligations, magnifying the risk from the mortgages.

“Goldman’s actions demonstrate that it often saw its clients not as valuable customers but as objects for profits,” Levin said.

“Its conduct brings into question the whole function of Wall Street.”

Levin also accused Goldman of “trying to sell a [expletive] deal” to investors, quoting from an email between Goldman employees.

Senior executives said that they were not prescient about the housing market, just diligent about limiting its risk.

The other Goldman officials also unwaveringly defended their conduct in the sometimes heated exchange throughout the day.

And investors appeared to think that the Goldman team emerged largely unscathed from the senate grilling, sending the US bank’s stock up by more than $4 before it pulled back to close at $153.04, up $1.01, or 0.7 per cent – the only major banking stock to end higher amid a market plunge on Tuesday after ratings agency Standard & Poor’s downgraded the debt of Greece and Portugal.

Some analysts saw Goldman’s stock rally as a sign that the bank had the upper hand against the subcommittee, leading investors to bet that the bank will be able to manage its legal problems.

Jonathan Corpina, president of Meridian Equity Partners, said he was “a little surprised the stock held its own”.

But he added that “it’s been beaten up a lot over the past few days, so the rest of the market may be catching up”.

The Securities and Exchange Commission filed a civil fraud case against Goldman on April 16, alleging that Goldman sold mortgage investments without telling buyers they had been put together with help from a hedge fund client, Paulson & Co, that was betting on the investments to fail.

That sent Goldman’s stock down 13 per cent, erasing $12.5 bn in market value.

Levin said that “as we speak, lobbyists fill the halls of congress hoping to weaken or kill reforms that would end these abuses”.

Republicans have so far succeeded in blocking debate on the reforms, and did again on Tuesday, but if the two parties were far apart on terms of a regulation bill, they were united in criticising Goldman in the highly charged committee room. 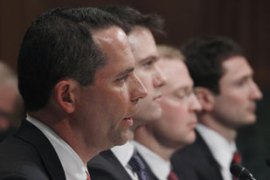 Top executives deny any wrongdoing as US politicians grill them during senate hearings. 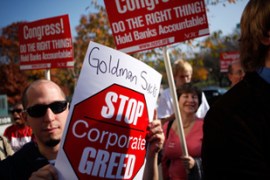 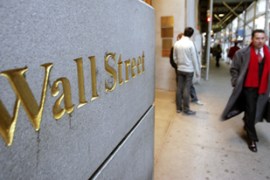 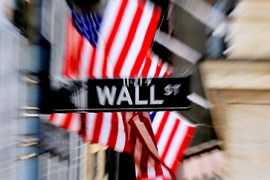 Fraud led to the financial crisis?

Media may be ignoring the facts on the sub-prime crisis, says Danny Schechter.