He said he expected the IMF’s executive board to approve the country’s request for about $13.4bn in loans.

With a public debt approaching $400bn and a swollen deficit, Greece bowed to intense pressure from financial markets last week and formally requested aid, triggering what would be the first bail-out of a member of the 11-year-old single currency bloc.

Dominique Strauss-Kahn, the IMF managing-director, said he was optimistic that “we will conclude discussions in time to meet Greece’s needs”.

“We are all aware of the seriousness of the situation and the courageous efforts being made by the Greek people,” he said in a statement.

In addition to the $13.4bn from the IMF, Greece is hoping to obtain loans of about $40bn from a group of 16 European countries that use the euro.

Papaconstantinou played down concerns that Germany might block a rescue deal.

Berlin has been reluctant to release the money amid strong domestic opposition in advance of a regional election on May 9.

“We are not ready to write a blank cheque,” Guido Westerwelle, the German foreign minister, said on Sunday.

“It is not at all agreed that Greece will actually receive aid from Europe. There will only be aid if there is no other way of stabilising our common currency.”

Papaconstantinou said that even if there are delays in getting parliamentary approval in some European countries, IMF support could be matched with bridge loans from other countries that had already cleared the deal.

However, the prospect of the bail-out being blocked has resulted in increased speculation from over the country’s economic woes.

For his part, Papaconstantinou warned investors that they would “lose their shirts” by betting on the country’s economic collapse.

The Greek government’s decision to request an aid package sparked clashes in the capital, Athens, on Friday.

It has also raised fears among workers unions that tougher measures than those already announced for the economy may be on their way.

The government had already announced huge budget cuts, including tax increases and reductions in public-sector wages.

Labour unions are planning protests against the government’s economic austerity measures, as part of ongoing demonstrations since the measures were announced. 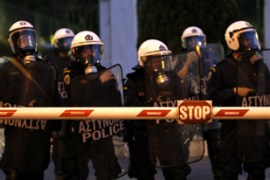 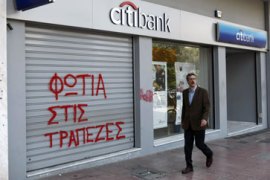 A financial bailout for Greece?

The Greek prime minister has asked the EU and IMF for help with his country’s debt crisis.