In a similar incident last October, six vehicles destined for Nato forces in Afghanistan, including one oil tanker, were attacked by about 30 gunmen in the Pakistani city of Peshawar.

These incidents convey the difficulty of undertaking a war in a landlocked nation such as Afghanistan. About 75 per cent of supplies for the Afghan war are sent either through or over Pakistan, including 40 per cent of fuel for troops.

Supplies have become a focus of attack for fighters who aim to stem the resources available to Nato and US forces in Afghanistan.

Supplies along the Khyber Pass have regularly come under attack, forcing the US to find alternative supply routes.

The Khyber Pass is the mountainous border crossing between Pakistan and Afghanistan, notorious for its treacherous terrain and often lawless outlying regions. 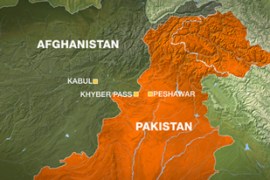 About 30 fighters attack supply vehicles at depot on the outskirts of Peshawar.