Of the injured, more than 1,400 were said to be in serious condition.

Spurred by the discovery of three survivors the previous day, rescuers searched for others still alive on Tuesday in the worst-hit town of Jiegu and surrounding villages.

A woman in her 30s, along with a 68-year-old Tibetan woman and her granddaughter, were pulled out alive on Monday after being trapped under their collapsed homes for almost a week, state media reported.

Relatives kept four-year-old Cairen Baji and her grandmother, Wujian Cuomao, alive by using bamboo poles to push water and rice through the rubble until rescuers could pull them out.

The woman and child were protected by a wooden bed frame, which they huddled under as their house fell to pieces around them.

Chinese authorities have ramped up relief efforts that have been slowed by the rugged terrain and high altitude of the disaster area, with relief vehicles bringing food, tents, blankets and other aid.

Efforts were also shifting towards rebuilding to help the tens of thousands left homeless in the mountainous area.

But relief efforts could be hindered as light snow began fell on Tuesday in the region, with more snow and sleet forecast for the next three days.

Temperatures are expected to drop below freezing, Xinhua cited Tsering Tashi, the deputy chief of the Yushu Prefecture Meteorological Bureau, as saying.

Light snow fell in some areas of the quake zone on Tuesday as rescuers continued efforts to try to find survivors trapped under rubble.

The strong response to the quake by the Chinese government has not been without political overtones in the sensitive Tibetan region.

Jia Qinglin, China’s most senior parliamentary adviser and the Communist party’s No 4 ranking leader, warned at a meeting on Monday of “hostile forces from abroad working to cause disruptions and sabotage” to the disaster-relief effort, CCTV said.

Jia did not mention any specific individuals, but the Chinese government often refers to supporters of the Dalai Lama and advocates of Tibetan independence as “hostile forces”. 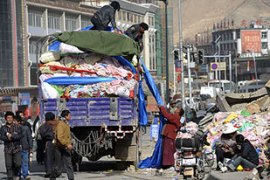 Victims to receive tents and food after spending nearly a week in freezing tempeatures. 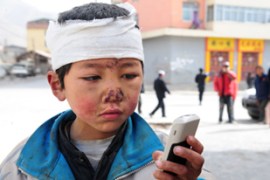 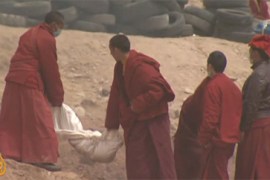 Mass funerals held for hundreds of victims of quake in remote Qinghai province. 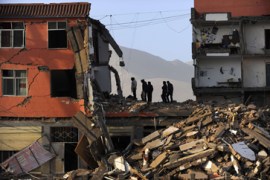