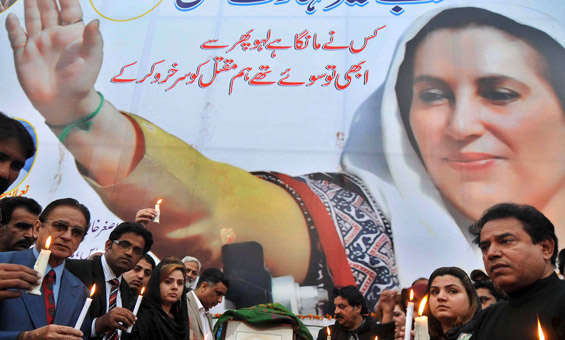 The United Nations is due to release the findings of its inquiry into the assassination of Benazir Bhutto, the late Pakistani opposition leader and former prime minister.

Killed in an attack at the end of a campaign rally in the city of Rawalpindi in December 2007, her death served as a rallying cry for her supporters and ultimately helped to propel her Pakistan Peoples Party (PPP) to election victory less than two months later.

Her death was, however, not an unexpected one. Benazir was not the first Bhutto to be killed for her politics, although she may be the last.

Zulfiqar Ali Bhutto, her father and Pakistan’s first democratically elected prime minister, was executed by court order following a coup d’état by General Zia-ul-Haq, then the army chief. Her two brothers, Shanawaz and Murtaza, were both killed as well – the former poisoned while on holiday in 1985, the latter gunned down at home in 1996 during Benazir’s first term as prime minister.

Like the Kennedys of the United States and the Nehru-Gandhi family in India, the Bhutto family has been a political dynasty in Pakistan that stretches back decades. And the legacy that Benazir Bhutto inherited from her father and carried on was that of a unifying figure that stood up for the poor.

“She always stood for democracy, like her father,” Tariq Pirzada, a lawyer and Pakistan political affairs analyst, said.

“She was an enlightened and progressive woman. She used the power of the legacy of her father and also her personal charm to unite the people behind her.”

Despite the controversy that dogged Bhutto’s return from self-imposed exile in October 2007 – after eight years away – and the numerous threats and warnings over safety, her arrival in Pakistan was cheered by hundreds of thousands of supporters who lined the streets of Karachi to welcome her.

“Few Pakistanis have hogged more limelight than the charismatic Benazir Bhutto. She was the Muslim world’s first elected woman prime minister, as well as the youngest,” Kamran Rehmat, the resident editor of Pakistani newspaper The Express Tribune in Islamabad, said.

“Bhutto left behind a strong legacy not only because of these milestones alone – the very fact that she led Pakistan’s largest political party for nearly three decades and fought two military dictators to return the country to democratic rule each time was no mean achievement.”

When, two months after her return from self-imposed exile, Bhutto died suddenly as she left a campaign rally, it was not just her supporters, but the whole country that stood shocked.

“It was a big trauma for me that day … I haven’t fully recovered till today,” Naheed Khan, a close advisor to Bhutto, who was in the car with her when she was fatally wounded, told Al Jazeera.

Following the tragedy, Asif Ali Zardari, Bhutto’s widower, and her son Bilawal Bhutto Zardari, were named co-chairs of the Pakistan Peoples Party, marking the first time since 1967 that a non-Bhutto headed the party.

With a groundswell of sympathetic support for the party, political groups that would not ordinarily have allied with the PPP agreed that something had to be done to return a degree of stability to the country, and a coalition government was formed.

Months later, after Pervez Musharraf, the former Pakistani president, agreed to step down, parliament voted in Zardari to take his place.

But despite coming to power, in part, on Bhutto’s popularity and campaign promises, experts say the last two years of PPP rule have had little to do with her or her father’s original vision for the party.

“Ironically, for someone who helped her party storm back into power even in her death, today’s PPP appears to have ditched her legacy, which was primarily borne of people’s rights and struggle for rule of law,” Rehmat said.

“Zardari … is more worried about how to stay in power … The government can fall apart at any time,” he said.

Pakistan is battling a host of problems – from a flagging economy and rising unemployment, to consistently inconsistent electricity supplies, skyrocketing food prices and anti-government demonstrations across the country.

On top of that are persistent security threats from pro-Taliban tribal elements on the border with Afghanistan, accusations that Pakistan is harbouring members of al-Qaeda, and anger internally over US drone attacks in the country.

Zardari himself is facing an up-hill struggle against corruption allegations, which have plagued him since the days of Bhutto’s first term in office, and earned him the nickname “Mr 10 per cent” – a term alluding to the commission a broker would take in a deal.

Opposition politicians are seeking to have thousands of corruption cases against Zardari reopened after they were dismissed by his predecessor, Musharraf.

“Whether or not it is right … [Zardari] is known as a symbol of corruption in the country,” Pirzada said.

“This is all, in the end, damaging Mr Zardari. A lot of people believe that this may be the last year of the PPP government.”

Zardari has, so far, kept the party united and retained a coalition large enough to govern, but with so many problems in the country as yet unresolved, the PPP’s ability to remain in power is evidently on the decline.

Where the future lies for what was once the party of Bhutto remains unclear.

The young generation of Bhuttos – Benazir’s 21-year-old son Bilawal and 25-year-old niece Fatma – have yet to enter the political fray properly.

“While the PPP remains the only political party with presence in all the four federating units, even party insiders admit the future is not all that bright either for the Bhutto family, whose next generation of leaders are still a few years from even getting the drift of the rough and tumble of Pakistani politics, or the party itself,” Rehmat said.

But even if the future looks grim now, the repercussions of the United Nations report on Bhutto’s death could reshape Pakistan’s political landscape.

Benazir’s widower has time and again proven himself to be a skillful political operator, and Bhutto’s party may yet live on as the party of Zardari.