It said that a main issue was “to prevent non-state actors from obtaining the information or technology required to use such material for malicious purposes”.

The communique also said that security measures should not limit nations’ rights to peaceful nuclear energy.

Obama said at a news conference that the leaders recognised the “urgency and seriousness of the threat” of non-state actors and thus had to make actions that are “bold and pragmatic”.

He also said that it was agreed that new institutions were not needed to carry out those actions but the strengthening of the UN, International Atomic Energy Agency (IAEA), and multilateral partnership.

The agreement will not be legally binding.

Obama had earlier called for action rather than talk to secure loose nuclear materials and prevent a potential “catastrophe for the world” should they fall into the hands of groups such as al-Qaeda.

The White House said on Tuesday that the US, Canada and Mexico have agreed to work together with the IAEA to downgrade a Mexican research reactor from using high to low enriched uranium fuel.

The move will allow the removal of all highly enriched uranium from Mexico.

Russia also said that it will spend up to $2.5bn to help dispose of weapons grade plutonium, while China agreeed to help draft new sanctions against Iran over its disputed nuclear programme.

Attending the summit are leaders and delegates from the five major nuclear powers and 42 others, in what is the largest international meeting hosted by a US president in more than 60 years.

Notable exclusions from the gathering include Iran, North Korea and Syria.

Meanwhile, Mahmoud Ahmadinejad, the president of Iran, said on Tuesday that he is drafting a letter to Obama offering talks and that Iran is Obama’s “only chance” to succeed.

“Obama cannot do anything in Palestine … What can he do in Iraq? Nothing. And Afghanistan is too complicated,” Ahmadinejad said.

“The best way for him is to accept and respect Iran and enter into co-operation. Many new opportunities will be created for him.”

Alireza Ronaghi, Al Jazeera’s correspondent in Iran, said: “Ahmadinejad has become as soft in his tone as possible. This is unprecedented.”

However, Ronaghi added that Ahmadinejad “changes his tone depending on the audience” and is likely to use the offer to say that if the US do not take it Iran will “go their own way”.

Gordon Duguid, of the US state department, told Al Jazeera that Ahmadinejad’s comments were not necessarily conciliatory.

“A conciliatory move would be accepting the deals that are on the table and going to the IAEA and showing that Iran’s nuclear programme is peaceful,” Duguid said.

“Statements are statements, actions are actions,” he said.

Al Jazeera’s Rob Reynolds, reporting from Washington DC, said: “There was barely any mention of Iran [by Obama] in the opening statement other than to say that countries that met their obligations can enjoy peaceful use of nuclear power.

“But clearly this is an issue that has been very dominant in the marginal discussions between Obama and other members of the international community.

“At the end we have a few interesting commitments from a few different nations, and assurances from Obama that they are all on the same page.

A day earlier, the talks were dominated by two developments – an apparent agreement between the US and China to work together on sanctions against Iran; and an announcement that Ukraine would surrender its stockpile of weapons-grade uranium.

Obama has framed the two-day summit as a key part of his broader agenda for ridding the world of nuclear weapons, and preventing weapons-grade material from falling into the hands of terrorists.

US officials hope leaders participating in the summit will agree on a series of security steps for their own nuclear material, and help pay to put the stocks of less well-off countries under lock and key.

The summit comes just days after Obama signed a new nuclear arms reduction treaty with Russia, and ahead of next month’s review of the Nuclear Non-Proliferation Treaty.

A follow up summit is planned in 2012 in South Korea. 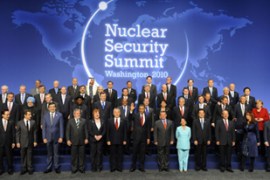 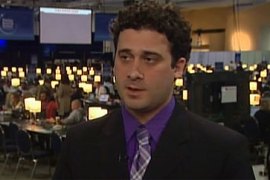 Interview: US push for nuclear deal 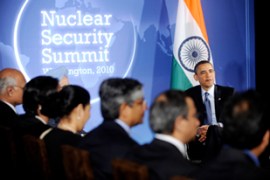 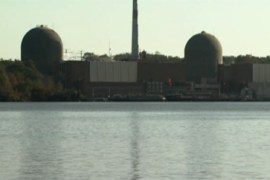