“Based on information we have received, there are many groups of protesters and some may attempt to use violent means,” Suthep said after meeting senior security officials.

The ISA allows the country’s top security agency – the Internal Security Operations Command – to impose curfews, operate checkpoints and restrict the movement
of demonstrators if protests by the UDD turn violent.

The Red Shirts plan to start their rallies in parts of Bangkok and the provinces on March 12. They plan to merge in the historic part of the city on March 14 in an operation that they said would “peacefully halt Bangkok”.

The UDD has said it would rally peacefully for at least seven days in what has been dubbed “a million-man march”, although analysts doubt the group can mobilise that number.

Following the decision to use the ISA,  Abhisit Vejjajiva, the prime minister, cancelled a visit to Australia planned for March 13.

After the announcement, Abhisit visited the Thai king in hospital in a routine briefing which included a discussion on the country’s current political situation.

Larry Jagan, a Southeast Asia analyst, told Al Jazeera that a real fear of the government are groups not under the control of the Red Shirts.

“These groups may do something silly during the demonstrations, and there have been reports of at least 20 hand grenades gone missing from the army barracks,” he said.

“The government should take the protests seriously because what we are seeing is a pro-Thaksin movement getting angrier and angrier at what they see as injustice. The divisions in Thai society are also getting wider and the governent needs to address this.

In April 2009, protesters brought traffic in parts of Bangkok to a halt, sparking Thailand’s worst political violence in 17 years. The riots that followed were quelled by the army.

Since then, the group has held peaceful rallies in the capital and elsewhere. 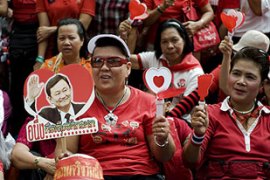 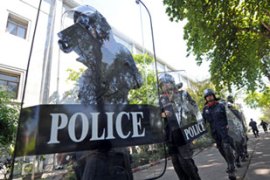 More than $1bn to be confiscated after court rules former PM abused his position. 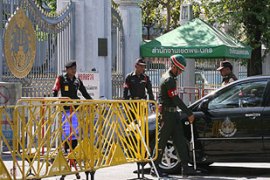 Thai court to rule on Thaksin