Barnaby Phillips, Al Jazeera’s correspondent in Turkey, said while survivors received emergency aid quickly, there are concerns about what will happen in the long run.

“In wider terms for Turkey, I think this is a wake-up call. This is a reminder that Anatolia lies on a series of seismic fault line and that the consequences can be fatal,” he said.

Tayyip Erdogan, the prime minister, blamed the region’s mud-brick buildings for the many deaths and said the government housing agency will build quake-proof homes in the area.

The quake was centred on the village of Basyurt, near the town of Kovancilar, and caught many people in their sleep.

Worst-hit was the Kurdish village of Okcular, where at least 15 of the 900 residents were killed and about 30 houses destroyed.

Graves were quickly dug and by the end of Monday afternoon all of the dead were buried following brief prayers at a village mosque that was missing part of its minaret after the quake.

“The population is not high and for that reason the death toll may not be as high as it would have been in the city centre.

“We’ve had a very wet winter and in this [affected] place there are mud houses and their ceilings are very heavy. They have been taking a lot of water this year and that may have contributed to the damage we see,” she said.

The quake killed many livestock, the main livelihood for locals in the impoverished region.

The quake was felt in neighbouring provinces of Tunceli, Bingol and Diyarbakir where residents fled to the streets in panic and spent the night outdoors.

Deadly earthquakes are frequent in Turkey,which is crossed by several active fault-lines.

Two powerful quakes in the heavily populated northwest claimed about 20,000 lives in August and November 1999.

In 2003, an earthquake measuring 6.4 brought down a school dormitory in the neighbouring province of Bingol province, killing 83 children

In 2007, an earthquake measuring 5.7 damaged buildings in Elazig. 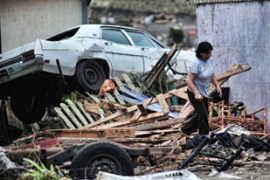 Eighteeen people have been killed and 27 injured after an earthquake shook villages in the north-eastern Turkish province of Agri.

An earthquake measuring 5.1 on the Richter scale has shaken an eastern region of Turkey, killing at least nine people and injuring dozens more.