It had reported days earlier that Mubarak was suffering from “chronic infections in the gallbladder”.

The report was unusual as discussion of the president’s health is usually a taboo subject in Egypt.

Samer Shehata, an Egyptian professor at Georgetown University, told Al Jazeera that since Egypt has no vice-president, news of Mubarak’s surgery becomes “a concern to many Egyptians and many outside the country if it does not go well”.

“Whenever there is a health issue with [the] president, all of a sudden questions of succession rise to the forefront of Egyptian politics, tremendous speculation, some concern and anxiety, and this is just one of those examples,” he said.

Mubarak’s fifth six-year term as president will end in 2011 and press reports in Egypt have suggested that his son Gamal is likely to succeed him.

Neither Mubarak nor his son have made any clear statements on the matter.

“The succession issue is one of the most hotly contested issues in Egypt right now. For good reason, it’s tied into the issue of democratisation and reform and so on,” Shehata said.

Rawya Rageh, Al Jazeera’s correspondent in Cairo, said that both the “timing and the announcement were significant”.

“This, of course, is an election year in Egypt. We’re expecting parliamentary elections later this year followed by presidential elections in 2011,” she said.

“President Hosni Mubarak has, of course, never appointed a vice-president and the issue of succession has always loomed over his presidency.

“All this comes at a time when the country is witnessing a heated political debate with the return of the former head of [the] IAEA, [Mohamed] ElBaradei, who has spoken a lot about reforms in Egypt; about the ability of independent candidates to run as presidential candidates for next year’s election.”

The IAEA is the UN’s nuclear watchdog, the International Atomic Energy Agency and ElBaradei, its former head, has said he could stand for president, but only if certain constitutional changes are made.

Mubarak has said that ElBaradei could run for the presidency, provided he respects the constitution.

Under Egyptian law, a presidential candidate is required to have been a leading member of a party for at least one year and for the party to have existed for at least five years.

ElBaradei, who established the National Association for Change after he returned to Cairo last month has proved popular among Egyptians and enjoys a high profile internationally.

Murbarak’s health has been a concern in the past. In 2007, rumours about his poor health were rife to the extent that he was prompted to make an unscheduled public appearance to dispel them.

One year later, Ibrahim Eissa, the editor-in-chief of the independent daily al-Dustur, was sentenced to two months in jail after his newspaper published rumours on Mubarak’s health, although he was later granted a presidential pardon. 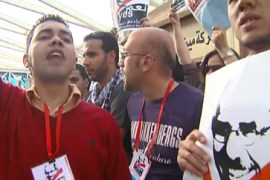 Former IAEA head returns to Cairo amid speculation that he may run for president.