“The President has fully recovered from the effects of the successful surgical intervention conducted on him exactly three weeks ago”, Markus Buechler, the director of the surgical department at Heidelberg University Hospital, said.

However, he recommended that the president rest for two weeks, before he gradually returns to his full and normal activity.

Mubarak, who has ruled Egypt for almost three decades, underwent surgery on March 6.

An official told the Reuters news agency the president would reassume presidential powers on his return.

He handed presidential powers to Ahmed Nazif, the prime minister, just before the operation, although he has been shown speaking on the telephone with foreign leaders and local officials while at the hospital.

As with other occasions when he has received medical treatment, the latest incident sparked rumours about his health. It led to Egypt’s stock market falling sharply in the days after the president’s operation.

However, it steadied when images of him sitting and chatting with doctors were broadcast on March 16.

Mubarak has not said whether he plans to run for a sixth six-year term in a presidential election due in 2011. 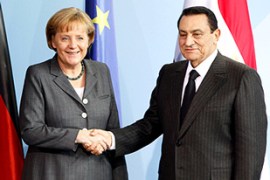 Hosni Mubarak had temporarily handed over power to PM before his gallbladder operation.