“We are confident the House will quickly pass the bill with these minor changes,” she said.

The points of order involved the revamp of the student loan programme which is included in the package, Jim Manley, a spokesman for Harry Reid, the senate Democratic leader, said.

One of the changes was technical, Manley said, and the other involved a provision in the Pell Grant student aid programme that helps fund low-income students.

Under the reconciliation rules – which allow the Democrats to pass the law by a simple majority of 51 votes rather than the 60 needed to overcome procedural hurdles – each provision in the bill must have a budgetary impact.

Republicans trying to halt the bill have been looking for language in the bill that could be challenged on that basis.

Ahead of the ruling in the Republicans’ favour, Democrats in the senate had managed to fend off 22 Republican amendments, methodically rejecting them in an around-the-clock voting session that begun on Wednesday and went into Thursday.

The senate adjourned and will resume debate later in the day.

The $940bn healthcare overhaul which expands insurance coverage to 32 million Americans, a move promised by Obama in his election campaign, was passed by the House of Representatives on Sunday and signed by the president.

At the same time a package of amendments sweetening the bill was sent to the senate, including an expansion of subsidies to make insurance more affordable and more state aid for the Medicaid programme for the poor.

It would eliminate a controversial senate deal exempting Nebraska from paying for Medicaid expansion costs, close a “doughnut hole” in prescription drug coverage and modify a January deal on a tax on high-cost insurance plans.

It also includes reform of the student loan programme. 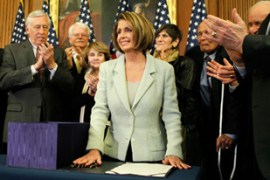 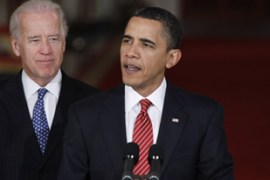 Obama hails House of Representatives’ 219-212 vote as “victory for the American people”.