Prior to the US-led invasion of Iraq, women working in the public and government sectors were entitled to receive a year’s maternity leave under family laws enforced by the former Saddam Hussein leadership.

In the seven years since the US-led invasion which ousted Saddam, however, maternity leave has been cut to six months.

Since the Personal Status Law was enacted on July 14, 1958, when Iraqis overthrew the British-installed monarchy, Iraqi women have enjoyed many of the rights that Western women do.

But the statutes governing the status of women since 1958 have been replaced with Article 2 of the new Iraqi Constitution, which states that “Islam is the official religion of the state and is a basic source of legislation.”

Sub-head A says “No law can be passed that contradicts the undisputed rules of Islam.” Under this Article the interpretation of women’s rights is left to religious leaders.

Yanar Mohammed, a women’s rights campaigner in Iraq, believes that the US has “let go of women’s rights” in the war-ravaged country.

“Political Islamic groups have taken southern Iraq, are fully in power there, and are using the financial support of Iran to recruit troops and allies,” she says.

“The financial and political support from Iran is why the Iraqis in the south accept this, not because the Iraqi people want Islamic law.”

According to the post-2003 Iraqi constitution, parliament should be comprised of no less than 25 per cent female candidates. As a result, the amended electoral law of December 2009 stipulated that parliament should comprise 82 female representatives.

Each party and coalition list must ensure that 25 per cent of its nominated candidates are women. However, the women’s quota has not been filled since 2005 and as a result, the elections commission said “special measures” must be implemented to ensure the quota is met.

Women’s rights groups in Iraq and abroad have complained that the Iraqi parliament has not provided information on what the measures involve or how it would go about implementing them.

According to Maha Sabria, a professor of political science at Al-Nahrain University in Baghdad, women members of parliament “stand up to defend their party in the parliament, not for women’s rights”.

Sabria also makes a direct link between the deteriorated status of women in the country to the lack of infrastructure, political and economic stability, and security. She believes that women bear a “double burden” as they have lost many of their freedoms due to, and under, the US occupation.

“More men are now under the weight of detention, so now women bear the entire burden of the family and are obliged to provide full support to the families and children. At the same time, women do not have freedom of movement because of the deteriorated security conditions and because of abductions of women and children by criminal gangs.”

Women, she says, are also now under pressure to marry at a younger age in the hope that a husband (including his family and tribal affiliations) will bring added security.

Sabria says that the abduction of women “did not exist prior to the occupation. We find that women lost their right to learn and their right to a free and normal life, so Iraqi women are struggling with oppression and denial of all their rights, more than ever before.”

Since 2003, many Iraqis sought refuge in the tried and tested security offered by tribal affiliations and allegiances.

As contemporary Iraqi society fell apart in the face of lawlessness, abductions, revenge killings and overall lack of security, the tribal system offered both refuge and order.

Some Iraqis believe that the decline in the modern and secular standard of living since 2003 propelled the social dynamic back by several decades.

“The real ruler in Iraq now is the rule of old traditions and tribal, backward laws,” Sabria says.

“The biggest problem is that more women in Iraq are unaware of their rights because of the backwardness and ignorance prevailing in Iraqi society today.”

Compounding the severity of the situation is the fact that many women also fled their homes because their husbands were arbitrarily arrested by occupation forces or government security personnel. A household without a male figure became far more vulnerable since 2003. Women sought refuge with relatives and failing to do so fled to Syria or Jordan.

According to United Nations estimates, more than four million Iraqis have been displaced in the past seven years, including approximately 2.8 million registered as internally displaced persons.

Many live as refugees mainly in neighbouring countries, according to a report by Elizabeth Ferris, co-director of the Brookings Institution-University of Bern Project on Internal Displacement.

The report, titled, Going Home? Prospects and Pitfalls For Large-Scale Return Of Iraqis, says most displaced Iraqi women are reluctant to return home because of continuing uncertainties.

For its part, the Washington-based Refugees International (RI) says in another report – Iraqi Refugees: Women’s Rights and Security Critical to Return – that “Iraqi women will resist returning home, even if conditions improve in Iraq, if there is no focus on securing their rights as women and assuring their personal security and their families’ well-being”.

The RI report covered internally displaced women in Iraq’s semi-autonomous northern Kurdish region and female refugees in Syria. “Not one woman interviewed by RI indicated her intention to return,” the report says.

“This tent is more comfortable than a palace in Baghdad; my family is safe here,” a displaced woman in northern Iraq told RI.

The situation continues to be challenging for women within Iraq. Yanar Mohammed believes the constitution neither protects women nor ensures their basic rights. She blames the US for abdicating its responsibility to help develop a pluralistic democracy in Iraq.

“I am an employee, and everyday go to my work place, and the biggest challenge for me and all the suffering Iraqis is the roads are closed and you feel you are a person without rights, without respect,” a 35-year-old government employee, who asked to be referred to as Iman, said.

“To what extent has this improved my security,” she asked. “We have better salaries now, but how can women live with no security? How can we enjoy our rights if there is no safe place to go, for rest and recreation and living?”

Dahr Jamail is an independent American journalist who reported from Iraq for eight months in 2003-2004. He is the author of Beyond the Green Zone: Dispatches from an Unembedded Journalist in Occupied Iraq.

Published under an agreement with IPS. 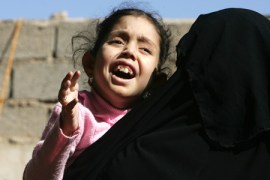 Are US weapons behind the increasing number of birth defects in the Iraqi city? 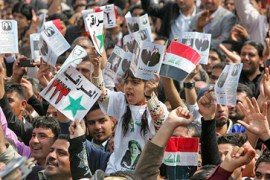 Analyst says a renewed spirit of nationalism is emerging in the war-ravaged country. 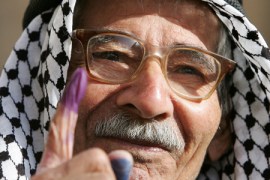 Democratic experiment may be messy but there is no alternative, says Robert Grenier. 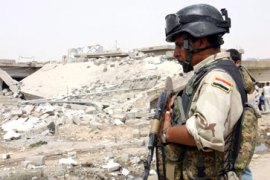