The border was closed in 2006 after tensions between Russia and Georgia escalated in a situation that eventually led to a five-day war in 2008.

Russia later mostly withdrew to within South Ossetia and Abkhazia, which Moscow recognised as independent states in August 2008.

The crossing is the only land border point that does not go through South Ossetia and Abkhazia.

But Nino Kalandadze, Georgia’s deputy foreign minister, said the move “does not mean [a] warming” in ties with Moscow.

“The opening of the crossing will not have significant economic or political consequences for Georgia,” the AFP news agency quoted Kalandadze as saying.

“But it is a positive fact that the differences between Georgia and Russia did not impede the opening.”

He said Georgia’s consent to the re-opening was “motivated exclusively by our will to give a  helping hand to our neighbour Armenia”.

The closing of the crossing dealt a heavy blow to Armenia, which relied on the crossing as its only overland route to Russia, the country’s key economic partner. 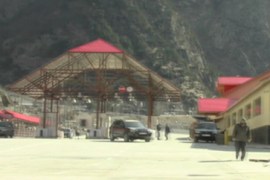 Locals on both sides of the border welcome the opportunity to trade, but little else. 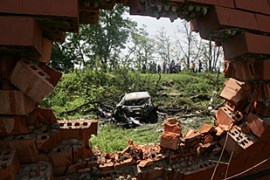