By then it will be almost a year since Obama’s high-profile speech in Prague in which he pledged to work towards a world free from nuclear weapons and to put an end to “Cold War thinking” in US strategy.

Speaking in the Czech capital on April 5 last year he said the US, as the only power to have use a nuclear weapon in conflict, had the “moral responsibility to act”.

As part of that plan he has called for the world’s nuclear powers to make major cuts in stockpiles in return for increased global efforts to counter the proliferation of atomic weapons.

White House officials have said the much-delayed NPR will focus on emphasising reliance on conventional weapons as a deterrent.

The review “will point to dramatic reductions in the stockpile, while maintaining a strong and reliable deterrent through the investments that have been made in the budget,” an unnamed senior official told the AFP news agency this week.

He said the review would go further than previous reviews in “embracing the aims of non-proliferation.”

It is also expected to commit the US to developing no new nuclear weapons, including the “bunker-buster” bombs advocated by Obama’s predecessor, George Bush, while also spending more money to ensure that existing weapons are reliable and work.

At the heart of the delay in releasing the NPR is reported White House frustration that the drafts of the document put forward by defence and security officials fail to reflect Obama’s Prague vision.

One key issue has been on whether to change US policy on the conditions in which nuclear weapons would be used.

Several Obama allies in the US Congress have been pressing the president to abandon the current ambiguous language that permits a nuclear response to a chemical or biological attack, even against a country that does not itself have nuclear weapons.

They want the administration to instead to declare that the sole purpose of US nuclear weapons is to deter a nuclear attack from another nation or force.

In turn, that would allow the US to carry out more drastic cuts in its arsenal, as envisaged in Obama’s Prague speech.

Obama’s supporters view a revised direction in US nuclear weapons policy as essential to America’s credibility in its efforts to rein in the nuclear ambitions of countries like North Korea and Iran.

Any ambiguity in US nuclear use policy, they argue, undercuts US credibility when it argues that other countries – e.g. Iran and North Korea – have no strategic reasons for building such weapons themselves.

But the NPR has reportedly triggered intense debate among Obama’s key advisors, among them Robert Gates, the US defence secretary, who seen as reluctant to back major changes in nuclear arms policy.

Gates, a former CIA director, is reportedly advocating that US policy continues to retain as much flexibility as possibly.

Meanwhile Joseph Biden, the US vice president, is arguing that the Obama administration’s NPR should minimise scenarios under which nuclear weapons would be used.

Another influential body is the National Security Council, which is thought to be sceptical that the president’s vision of a nuclear-free world is an achievable reality.

The debate over US nuclear policy comes ahead of a critical period in international arms control efforts.

US and Russian negotiators are currently in the midst of negotiations on a replacement to the 1991 Strategic Arms Reduction Treaty (START), which expired on December 5.

The broad outlines of a new treaty have been clear since July, when Obama and his Russian counterpart, Dmitry Medvedev, agreed to slash the number of warheads on either side to between 1,500 and 1,675.

However, the details of the treaty are still being hammered out and there is no deadline set for it to be signed.

Meanwhile what stance the US eventually decides to take in the NPR is also expected to set the tone for the Non-Proliferation Conference taking place in May.

The meeting is expected to review the existing nuclear non-proliferation treaty, with the Obama administration pushing for stronger measures to prevent the spread of atomic weapons.

During those talks the world’s nuclear powers will likely face renewed pressure from non-nuclear states to demonstrate they are serious about eliminating the nuclear threat. 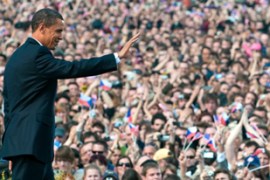