Karadzic, who is facing 11 counts of genocide, war crimes and crimes against humanity, is accused of orchestrating the siege of Sarajevo, in which the city’s inhabitants were terrorised by sniping and shelling for 44 months.

About 10,000 people were killed in that time and many more wounded.

But in detailing what he called the “myths” of the conflict, Karadzic told the court the blockade of Sarajevo could not be classified as a siege and came about as a result of Muslims killing each other.

He said the deaths in Sarajevo were the result of a “cunning strategy” by young Bosnian Muslims “aimed at bringing in foreign troops and foreign intervention”.

Barnaby Phillips, Al Jazeera’s correspondent in The Hague, said: “Karadzic said it wasn’t a siege at all, they [the Serbs] were allowing plenty of humanitarian aid into the city.

“He acknowledged that Serbs had been accused of firing at civilian targets on many, many occasions in Sarajevo.

“But he said that these incidents were either faked or that sometimes the Serbs had to fire at schools or museums because the Muslims had stationed military positions there.”

Karadzic also dismissed the killing of more than 7,000 Muslim men and boys at Srebrenica in 1995, described by prosecutors as the worst atrocity in Europe since World War Two, as a fiction concocted by Muslims.

He said that they had used bodies gathered into mass graves to cast blame on Serbian forces.

“It is going to be easy from me to prove that I had nothing to do with it,” Karadzic said, arguing that the evidence of any killings in Srebrenica was too sketchy to show what had happened.

Phillips said: “He ridiculed the notion that Srebrenica had been a UN safe haven, he preferred to speak of it as a military stronghold where the Bosnian Muslim army was in force.

“And he suggested that elements within the UN peacekeeping force were smuggling weapons in.

“He ridiculed the figures that we often hear about Srebrenica, of 7,000 or 8,000 people being massacred there.

“He said only 2,000 to 3,000 bodies had been uncovered and that these bodies were rather the result of several years of fighting and a frontline having fluctuated back and forth around the town of Srebrenica.”

Reaction from survivors of the Srebrenica massacre, who came to The Hague to attend proceedings, was swift and indignant.

“He should be given the Nobel Prize for lying,” said Sabra Kolenovic of the Mothers of Srebrenica.

Karadic also told the court on Tuesday that Serbia had made several attempts to avoid war in the run-up to the Bosnian conflict.

He said that Serbs had been prepared to give up their own political assembly in Yugoslavia to prevent the conflict happening.

Karadzic also said that ethnic and religious tensions at the time had been heightened by a Muslim police force “wreaking havoc” on Serbs.

“The Serbs attempted before the beginning of the war several chances and options for peace and they were even prepared to give up on their own assembly,” he said.

“There was massive, massive abuse of the joint police, the Muslim police. They were wreaking havoc. We can see that as testified by prosecution witnesses.”

Karadzic is accused of having colluded with Slobodan Milosevic, the late Yugoslav leader, with the aim of creating a “Greater Serbia”, leading to the 1992-95 Bosnian war in which 100,000 people were killed and 2.2 million displaced.

But Karadzic’s opening statement has sought to reinterpret the events of the war.

Aljosa Milenkovic, a Serbian journalist following the trial, told Al Jazeera that many Serbs felt it was time for Karadzic to “tell the Serbian side to the world”.

Speaking to Al Jazeera from Belgrade, he said: “Locals here … feel like they have been villainised by the international and foreign media for the last 10 or 15 years.”

He faces possible life imprisonment if convicted in what is one of the last and largest cases brought to the UN war crimes tribunal for the former Yugoslavia. 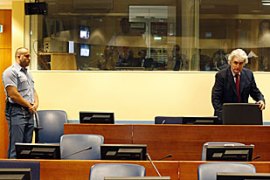 Ex-Bosnian Serb leader defends his actions as genocide trial resumes in The Hague. 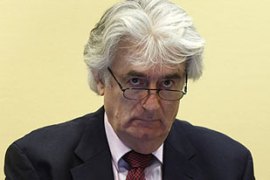 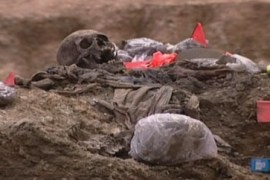 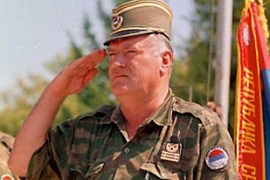