“The decision was taken with a degree of leniency … Its licence was not revoked and its case was referred to the judiciary.”

The watchdog also revoked the licence of the weekly Irandokht (Daughter of Iran) over “not meeting the conditions in the press law on practical commitment to the constitution”, Isna said.

Karroubi’s wife and son, Hossein, first launched Irandokht as a women’s lifestyle magazine, but a new editorial team switched its coverage to political and cultural affairs two months ago.

Security forces raided Irandokht‘s offices in December when Mohammad Ghoochani, the new editor took over, and authorities have since jailed one of its journalists, Emadeddin Baghi, a human-rights campaigner.

“Mr Ramin, in talking to my mother over the phone, did not come up with any breach of press law (against the weekly) so he told her that Mr Karroubi has taken a very harsh position after the presidential elections against the Islamic republic,” Hossein Karroubi was quoted as saying on the opposition website Rahezabz.net.

The elder Karroubi has repeatedly accused authorities of abusing protesters detained during post-election protests, including the rape of several male and female detainees.

Most leading reformist daily newspapers have been banned under Ahmadinejad.

Dozens of journalists working for the publications have also been jailed since street protests broke out against the June election which the opposition say was massively rigged in Ahmadinejad’s favour.

Ghanbar Naderi, a journalist for the Iran Daily, an official government newspaper, told Al Jazeera that journalists have to censor much of what they write, irrespective of their political background.

“The press law in this country is very tough and unforgiving, it doesn’t make any difference if you are a reformist or a conservative media outlet,” he said.

“In these sensitive times, with the country under constant political pressure, as a journalist your first mistake will be your last.

“Even I – working for the government, an official organistation – have to censor so many things because I don’t want to attract any attention to my professional life. There is no job security as a media person.”

In another move indicating a continuing crackdown on dissenters, Jafar Panahi, an award-winning Iranian filmmaker and a vocal supporter of the opposition movement, has reportedly been arrested along with his family and guests during a raid on his Tehran home.

Panah Panahi, Jafar Panahi’s son, told the Rahesabz website on Tuesday that the filmmaker, his wife and daughter, as well as 15 guests, were arrested and taken to an unknown location.

He said the authorities had searched the house and confiscated personal belongings and computers.

Panahi was briefly detained in the summer with his family after attending a memorial at Tehran cemetery for Neda Agha Soltan, a protester who was killed during the post-election violence. 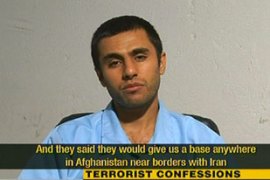 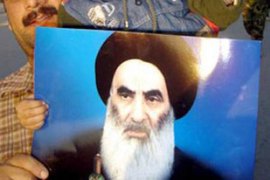 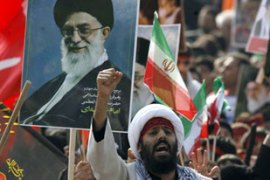 Heavy security as tens of thousands of people gather in Tehran for Revolution Day. 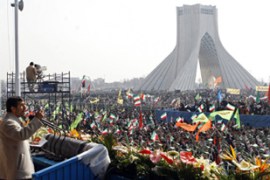