Lula laid a yellow and green wreath on Arafat’s mausoleum in Ramallah and told a crowd of Palestinian officials and several dozen people waving Brazil’s flag that he had participated in pro-Palestinian protests in the past.

Later Lula said that Brazil was willing to talk to Hamas, which is listed by the European Union and the US as a “terrorist” organisation.

“Brazil is prepared to talk to everybody,” he said. “All the parties involved must be listened to.”

Lula’s comments are unlikely to have endeared him to Israel.

A day earlier, Avigdor Lieberman, Israel’s foreign minister, said he had boycotted meetings with Lula because the Brazilian president did not pay a visit to the grave of Theodor Herzl, one of the founders of Zionism.

“Brazil, under Lula, has been  pressing very hard for a permanent seat on the Security Council of the United Nations, and if Brazil can intervene in some effective way in the Middle East crisis, this would clearly do Brazil’s chances no harm at all,” he said.

“Their unique selling point in the Middle East is their engagement with Iran … and I think they hope this policy of engagement will help to bring Iran in as part of the solution rather than part of the problem.”

Also visiting Palestinian leaders on Wednesday was Catherine Ashton, the European Union’s foreign policy chief, on the first leg of a two-day visit to the region.

Like Lula, Ashton has criticised Israeli settlement building, telling Arab leaders in Cairo on Monday that the settlements threaten peace talks and are illegal.

During a joint news conference in occupied Jerusalem with Lieberman, Ashton also called for the immediate resumption of peace talks.

“I believe that it’s in the long term interest of this country that this government, together with the Palestinians, determine that future and the sooner we get to the talks, the better,” she said.

She also said the so-called Quartet of Middle East negotiators would be “reinvigorated” in their efforts.

Jacky Rowland, Al Jazeera’s Jerusalem correspondent, said: “I think plenty of people on the ground here have wondered what the Quartet is – it’s this body that brings together the Russians, the Americans the EU and the UN – but actually it hasn’t been seen to be having much impact here on the ground.”

She continued: “It’s difficult to say exactly how pressure on Israel might be exerted, it certainly wouldn’t be exerted in public press conference, it’s far more likely to go on behind the scenes.

“What Ashton did stress though was that the EU’s role was much more an economic one than a political one … she said the EU was there to provide the economic weight to support the process.”

A Quartet meeting to be held in Moscow this week appears likely to be dominated by the issue of Israel’s settlement construction.

Israel’s continued settlement building has caused a crisis Israel relations with the US after Israel unveiled plans to construct 1,600 new homes on occupied Palestinian land during a visit by Joesph Biden, the US vice-president. 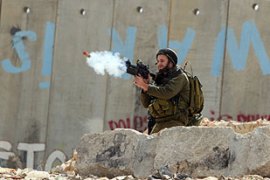 Palestinians clash with Israeli police who remain heavily deployed despite lifting of closure. 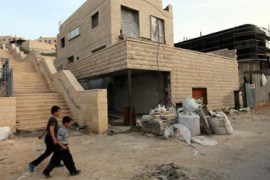