A Eurogroup statement said the “objective would not be to provide financing at average euro area interest rates, but to safeguard financial stability in the euro area as a whole”.

The ministers from the 16-country currency bloc said in a statement: “It [the Eurogroup] clarified the technical modalities enabling a decision on co-ordinated action and which could be activated swiftly in the case of need.”

They said the mechanism aims to provide Greece with “strong incentives to return to markets as soon as possible”.

Jean-Claude Juncker, the Luxembourg prime minister and the head of Eurogroup, said the mechanism will kick in the moment Greece appears unable to finance itself on the market, in spite of the government’s austerity measures.

“The member states of the euro area will take co-ordinated action if such action turns out to be necessary,” he told a news conference after the talks.

“We clarified the technical arrangements … to take co-ordinated action.”

Juncker also stressed the fact that the Greeks “have not asked for aid” and said the ministers “still don’t think it will be necessary”.

The Greek economy is burdened with a €300bn debt and the government is looking to raise €54bn this year to finance it, but it is struggling to do so without paying premium interest rates.

Olli Rehn, the Greek economic and monetary affairs commissioner, citing his report to eurozone ministers said the country was on track to cut its annual budget deficit this year by four percentage points.

The austerity drive has been met by a series of protests and strikes there in recent weeks.

Last month, George Papandreou, the Greek prime minister, said that his country’s borrowing needs were assured only until mid-March.

Germany has been hawkish on the issue, being openly reluctant to bail out Greece.

Wolfgang Schaeuble, the German finance minister, warned that countries could eventually be kicked out of the eurozone if they did not adhere to tighter restrictions in future.

“We need stricter rules – that means, in an extreme emergency, having the possibility of removing from the euro area a country that does not get its finances in order,” he was quoted as saying. 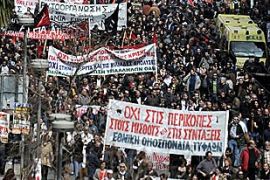 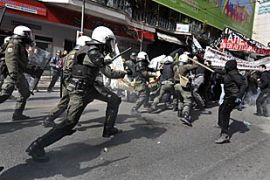 EU: No agreement on Greece bailout 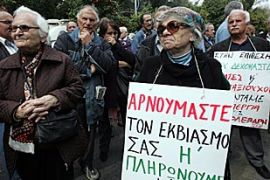 French and German leaders in positive talks over scheme to help states in times of need.