The main island of Viti Levu was spared the worst of the devastation but there are reports of extensive damage from Vanua Levu, the second largest island, and eastern outlying islands, according to officials.

“We have so far got a tally of over 50 homes destroyed – a very serious issue. We expect these figures to increase for the next few days.”

The full extent of the devastation was still unclear as communications to many of the smaller islands and isolated areas on Vanua Levu were cut by the storm.

Authorities have expressed concern about the state of the northern islands of Cikobia and Qelelevu, cut off since they were hit by the cyclone on Monday.

Telecommunications and electricity remained out in many parts of Vanua Levu, and water and sewerage services were also affected.

Fiji’s meteorological service has classified the cyclone as a Category Four storm, the second-most destructive rating on a five-point scale. 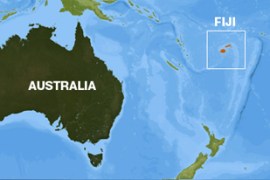