Riot police allowed protest leaders to pour blood over the gates of the building, which was quickly cleaned up by a medical team provided by the government.

Following the demonstration, Red Shirts rode on lorries and motorcycles to the nearby headquarters of the governing Democrat party, where they splashed several more jugs of blood.

The group claims that the current government is illegitimate and is propped up by anti-democratic forces in the Thai military and elements within the traditional ruling class.

But the government has shown no sign of heeding pressure to call elections, which Thaksin’s allies would be expected to win.

Panitan Watanayagorn, a government spokesman, said authorities will allow the protest as long as it remains peaceful.

“If they want to throw it and have a photo op and have us clean it up later, I think it’s fine,” he said.

Panitan said health authorities were looking into whether “throwing blood on the streets violates health measures”.

Abhisit has not entered his office at the government headquarters since anti-government protests began on Friday.

Over the weekend, as many as 100,000 Red Shirts converged on Bangkok to demand that Abhisit dissolve parliament by a deadline of midday on Monday and call new elections.

Abhisit has rejected the ultimatum and imposed a security blanket across Bangkok.

“A decision cannot be made between protesters and the government, because it is related to the whole country,” he said on national television on Tuesday.

He said that “dissolution must happen on the condition that it will make the country move forward”.

A joint session of both houses of parliament on Tuesday was postponed due to the lack of a quorum, with some legislators fearing for their safety, according to a Thai parliamentary official.

In 2008 the compound around government headquarters was occupied for three months by anti-Thaksin activists known as the People’s Alliance for Democracy (PAD) or, more popularly, as the yellow shirts.

Thailand has been in constant political turmoil since early 2006, when protests against Thaksin paved the way for a bloodless coup removing him from power.

In 2008, when Thaksin’s political allies came back to power for a year, thousands of Yellow Shirt protesters took to the streets, occupying the compound of the prime minister’s office and laying siege to Bangkok’s two airports for a week.

Thaksin himself has addressed his supporters through video messages, urging them to continue their struggle in a nonviolent fashion.

In a message on Monday, Thaksin, who is living in exile, called for politicians, soldiers, policemen, judges and members of the bureaucracy to join the Red Shirt cause. 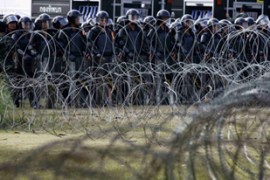 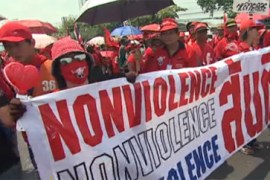 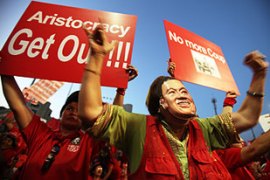 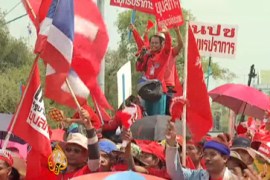