The group behind the latest violence in northern Nigeria is known by several different names, including al-Sunnah wal Jamma, or Followers of Muhammad’s Teachings in Arabic, and Boko Haram, which means “Western education is forbidden” in the local Hausa dialect.

The group was founded in 2002 in Maiduguri, the capital of Borno state, allegedly by Mohammed Yusuf, a religious teacher.

In 2004, it moved to Kanamma in Yobe state, close to the border with Niger, where it set up a base dubbed “Afghanistan”, from which it attacked nearby police outposts.

Boko Haram, which includes members who come from neighbouring Chad, is said to not only oppose Western education, but Western culture as well.

Abdulmuni Ibrahim Mohammed, a senior member of the group arrested on Monday, told the Reuters news agency that “we do not believe in Western education. It corrupts our ideas and beliefs”.

“That is why we are standing up to defend our religion”.

Yusuf has reportedly said that the war will “continue for long”.

The latest clashes began in Dutsen Tenshin, a neighbourhood of the city of Bauchi, capital of the state of the same name.

Bauchi is one of 12 states in northern Nigeria where sharia, or Islamic law, is practiced.

Muslims attacked Christians and set fire to churches in retaliation for the burning of two mosques, which had been blamed on Christians.

Last November, more than 700 were killed in Jos, capital of Plateau state, when a political feud over a local election degenerated into bloody confrontation between Muslims and Christians.

Salisu Mohammed, a conflict management specialist, told Al Jazeera that Nigerian authorities should have acted sooner to stop the proliferation of Boko Haram.

“Many people have known of the existence of this group, silently and within the community, especially in the last year,” he said.

“They are becoming more extreme because in the past there wasn’t a major push in place to check their proliferation.

“They are taking advantage of a broken-down structural condition in Nigeria that people can take the law into their hands without getting reprimanded.”

Analysts have also said that at the heart of this week’s violence is dire poverty and political manoeuvring – not religion.

They believe attacks were committed mainly by frustrated, unemployed youths and orchestrated by religious leaders and politicians who manipulate them to retain power.

Mohammed Yusuf, the group’s leader, was killed in the aftermath of clashes between Boko Haram and Nigerian police in August 2009.

The police said that he was killed while trying to escape from custody, but his body was found in the street, still handcuffed, raising concerns that he had been the victim of an extrajudicial killing. 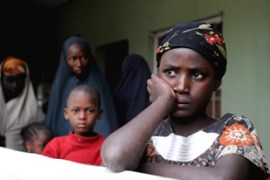 Troops and fighters seeking sharia battle on despite president’s “under control” claim.