“The only path that is left to us at this point, it seems to me, is that pressure track but it will require all of the international community to work together,” Robert Gates, the US defence secretary, said.

PJ Crowley, a spokesman for the US state department, told Al Jazeera that Washington had “no interest in creating additional hardships on the Iranian people”.

“But we’ll be looking at a variety of options particularly focused on the Revolutionary Guard Corps that’s played an increasing role in not only Iran’s security but also its economy.

“We should try to support the Iranian people … but certainly we have to look at ways in which we can apply pressure on the government and its various entities so that should Iran continue to act in contradiction to UN Security Council resolutions, that it will pay a price for that intransigence.”

Recognising that “there is a legitimate humanitarian need in having additional fuel that can provide the Tehran research reactor the ability to produce medical isotopes that have a valuable role for the Iranian people”, Crowley said.

However, he said that the US had not “given up on engagement”.

“We’re willing to sit down with Iran as we did last fall in a good faith effort – Iran has to be willing to meet us halfway.”

Bernard Kouchner, the French foreign minister, said on Monday that he did not believe Iran had the ability to raise the enrichment level of its uranium and that the move by Tehran was “blackmail”.

“One could call it diplomacy, but if that is what is then it is truly negative,” said Kouchner.

Kouchner said all the major powers apart from China were in favour of a fourth round of UN-backed sanctions.

Britain’s foreign office also cast doubt on Iran’s ability to turn the further enriched uranium into fuel for the research reactor saying it “does not have the technology to manufacture it into fuel rods”.

Material for the fissile core of a nuclear warhead must be enriched to a level of more than 80 per cent, getting its stockpile to the 20 per cent would be a significant step in the nuclear programme.

David Albright of the Washington-based Institute for Science and International Security said achieving the 20 per cent level “would be going most of the rest of the way to weapon-grade uranium”.

Mohammad Marandi, a political science professor at Tehran University, said that thousands of Iranians would benefit from the medical application of the enriched uranium.

When Iran’s nuclear finishes, which it will in roughly a year, then you will see thousands of people in Tehran and around the country dying as a result,” he told Al Jazeera.

“Iran basically has no option, either Western countries stop dragging their feet and come to the negotiating table …or the Iranians have no option to produce their own enriched uranium at 20 per cent.”

Ramin Mehmanparast, the Iranian foreign ministry spokesman, said that the latest enrichment programme did not preclude a swap deal going ahead.

“Our preparation for 20 per cent enrichment has got nothing to do with the swap. We are still ready for the swap if our requirements are met,” he said.

The UN plan was drawn up in early October in a meeting in Geneva, Switzerland, between Iran and six world powers – the UK, China, France, Russia, the US and Germany – and later refined at a meeting in Vienna.

The talks in the Austrian capital came up with a draft proposal that would take 70 per cent of Iran’s low-enriched uranium to reduce its stockpile of material that could be enriched to a higher level, and possibly be used to make nuclear weapons.

That uranium would be returned about a year later as refined fuel rods, which can power reactors but cannot be readily turned into weapons-grade material.

Ahmadinejad had last week appeared to support the deal in an interview on state television, but on Sunday he blamed the West for the stalemate. 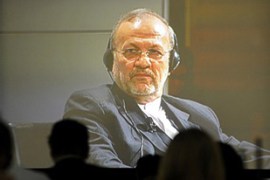 Defense secretary dismisses Iran’s claims uranium swap could be agreed in near future. 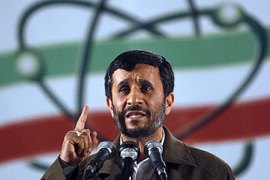 Iran: No problem with nuclear plan

Ahmadinejad appears to change tack on plan to send uranium abroad for enrichment.