His trial was adjourned without a verdict in August last year.

Tan’s laywer, Pu Zhiqiang, said his client’s earthquake activism had not been included in the case.

He said Tan was the first person in a decade to be sentenced for actions related to the 1989 crackdown.

Tan’s supporters have said however that Chinese authorities were trying to silence him for his investigation into the collapse of dozens of schools in the 7.9-magnitude earthquake that struck Sichuan in May 2008, leaving almost 90,000 dead.

Tan had estimated at least 5,600 students were among the dead, believing that many of them died in schools that had been shoddily built and did not comply with construction laws.

Critics say corruption between builders and local officials led to the poor construction of schools, leaving them susceptible to collapse while nearby buildings remained intact.

Activists and parents – many of whom lost their only children in the quake – have repeatedly demanded those responsible be investigated and punished.

But many who have pressed the issue say they have been detained, harassed or threatened by police or thugs believed to be hired by local officials.

In a related case, the same court also rejected the appeal of Huang Qi, another prominent dissident, who had also been critical of the government’s response to the Sichuan earthquake.

Huang, the founder of a human rights website, had been sentenced to three years in jail in November on the charge of illegally possessing state secrets.

He was detained in June 2008 and had previously served a five-year prison sentence on subversion charges linked to politically sensitive articles posted on his site. 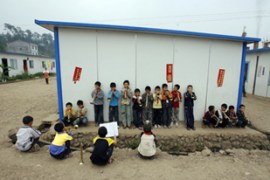