Toyota’s latest quarterly profit contrasts with a $1.81bn loss in the same quarter a year earlier.

As a result the company said it had revised its outlook for the year to March to a profit of $882m, compared to an earlier projected loss of $2.2bn.

Toyota was one of the biggest beneficiaries of the government-backed “cash-for-clunkers” scheme in the US – its biggest market – but has in recent weeks has faced a storm of criticism in recent weeks for its handling of the potentially faulty accelerator pedals.

The latest earning figures do not reflect the damage from massive recalls which were first announced on January 21.

A freeze on US sales of eight of its most popular models affected by the recall and repair costs on the millions of cars involved are expected to undermine earnings in the current quarter.

The recalls over potentially faulty accelerator pedals, which originally began in the US, have since spread to cars sold in China and Europe with no sign that the problem has yet been contained.

The latest recall of an estimated 180,000 cars in the UK announced on Wednesday takes the total number of vehicles affected worldwide to about 8 million, more than the company’s total global sales last year.

The scale of the alert has badly dented the company’s reputation, slowed sales around the world and hammered Toyota’s share price, which sunk to a 10-month low in Tokyo on Thursday.

About $30bn – or one fifth of Toyota’s capitalisation – has been wiped off the company’s value since the alert was first raised in mid-January.

Compounding the alarm surrounding the recall, on Wednesday the US transportation secretary urged owners of affected Toyota cars to stop driving them immediately until the problem had been fixed.

Ray LaHood’s statement set off a brief wave of panic before he later withdrew the remark, calling it a “misstatement”.

“What I meant to say and what I thought I said was if you own one of these cars or if you’re in doubt, take it to the dealer and they’re going to fix it,” LaHood told reporters.

Nonetheless he added that his agency was looking at possible civil penalties for Toyota over safety violations that could cost the company millions of dollars in fines.

US officials, he said, would “hold Toyota’s feet to the fire” to ensure they are taking all necessary steps to ensure their cars are safe.

Toyota, for its part, has sought to reassure drivers that problems with sticky accelerator pedals have been extremely rare – and that any affected car can be stopped by firmly stepping on the brakes.

“We want to make sure our customers understand that this situation is rare and generally does not occur suddenly,” the company’s US unit said in a statement.

However, on Thursday the damaging news for the company continued after the carmaker confirmed it had received nearly 200 complaints involving brake problems from owners of its Prius hybrid.

Ririko Takeuchi, a Toyota spokeswoman, said the complaints involve the new Prius model, which went on sale in Japan and the US in May 2009, but the company has not yet announced any recalls for the car.

Japan’s transport ministry has pressed Toyota to look into the problem.

“We are asking Toyota to look into the matter, including possibly making a recall on the Prius,” Seiji Maehara, the Japanese transport minister, said.

Francis Lun, a market analyst and a managing director of Fullbright securities in Hong Kong, said the problem with the brakes on the high-profile Prius comes at the worst-possible time for Toyota.

“Toyota has been well known for its quality control… It will take them a long time –  several years – to rebuild their reputation,” he told Al Jazeera.

Earlier Toyota announced a further expansion in its recall over accelerator pedals, adding thousands of cars sold in the UK.

Toyota gave no details of the number of cars involved, but British media reports indicated more than 180,000 vehicles would come under the recall.

“It has been identified that there is a small risk of an accelerator pedal fault in certain Toyota models,” Toyota’s UK office said a statement.

“We are voluntarily recalling specific models from the range to investigate and eliminate the problem.”

The statement came as the UK’s Guardian newspaper reported on Thursday that British criminal lawyers have advised Toyota owners to stop driving their cars immediately, warning they could be held responsible for any accident involving a vehicle subject to recall.

“If you have one of the affected Toyota models, you should not drive the car until it has been checked out,” Nick Freeman, a UK-based traffic lawyer, told the paper.

“The recall puts you on notice that there could be a fault, which means that you assume responsibility. You could be held criminally and civilly responsible for an accident and, in the case of a fatal accident, you could be charged with death by dangerous driving. If you have one of these cars, don’t drive it.” 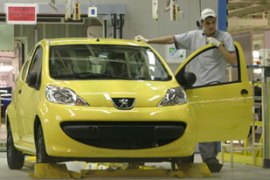 Two models built in conjunction with Toyota are recalled as “preventive” measure. 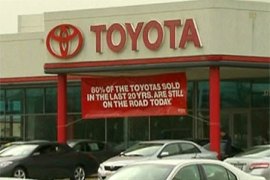 Japanese car giant tries to limit dent in reputation for quality and reliability. 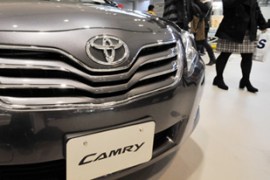 Toyota urged to act over recalls

Cars in China and Europe join US on faulty accelerator pedals list.